In our series of articles called The One Who Got Away, we look at players who the Pittsburgh Pirates parted ways with early in their career and they went on to do better things elsewhere. Right-handed pitcher Ed Whitson would qualify for that part of the article.

Whitson would be perfect for that article except for one thing. When the Pirates parted ways with him in 1979, they sent him to the San Francisco Giants and received Bill Madlock in return. The Pirates didn’t give up on Whitson, they traded him for an All-Star who helped them win the World Series. Pittsburgh also picked up reliever Dave Roberts in the same deal, and he helped the bullpen with a 3.26 ERA in 38.2 innings in 1979.

Whitson fits better in this series on our site, though his success in the 1980’s doesn’t make him an obscure player overall. His time with the New York Yankees was short-lived, but well publicized. Most older baseball fans know who he is, but his short time with the Pittsburgh Pirates over 40 years ago makes him perfect for this article.

At 19 years old, the Pirates drafted Whitson out of Unicoi County HS in Erwin, Tennessee on June 5, 1974, exactly 46 years ago today. He signed with the Pirates a short time later and made eight starts in the Gulf Coast League, posting a 4.30 ERA in 44 innings.

In his first full season with Pittsburgh, Whitson was assigned to Charleston of the Western Carolinas League (Low-A). The young right-hander struggled with the new level, going 8-15, 5.07 in 144 innings. Despite the tough season, he was promoted to the Carolina League in 1976 and had an outstanding year. Whitson went 15-9, 2.53 in 26 starts. His other stats are unheard of during this day in the minors (and the majors for the second one). Whitson pitched 203 innings that year and completed 16 games. For reference purposes, the Pirates got 13 complete games total from all of their minor league starters in 2019, and most of those were seven inning games during doubleheaders. 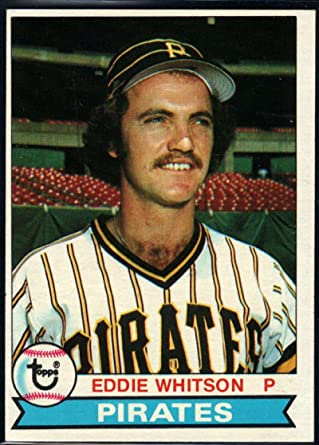 In 1977, Whitson was promoted to Triple-A, where he had an 8-13 record, though it came with a 3.34 ERA in 175 innings. He completed nine of 26 starts that year. He earned a call to the majors in September and made his debut on the 4th in Los Angeles against Dodgers. He pitched 1.1 innings in relief without a hit, though he gave up a run due to three walks.

Whitson would get his first big league start 13 days after his debut and he picked up the win with three runs over five innings against the Montreal Expos. His second start was the final game of the season, game two of a doubleheader on October 2nd. Whitson tossed six shutout innings against the Chicago Cubs, giving up two hits and one walk, with two strikeouts.

Despite the strong finish, Whitson was back in Triple-A to begin the 1978 season. After posting a 3.71 ERA in seven starts, he was called up to Pittsburgh in late May. The Pirates put him in the bullpen for the rest of the season and he was used in long relief quite often, including 17 appearances of 2+ innings. He pitched a total of 43 games and posted a 3.28 ERA in 74 innings, while picking up four saves. He would collect just four more saves during the rest of his 15-year career in the majors.

Whitson made his first Opening Day roster in 1979. He debuted in relief on April 8th, then pitched eight innings as a starter during a win on the 14th versus the St Louis Cardinals. He went back into the bullpen until the Pirates called on him for consecutive starts in mid-May (our 1979 day-by-day recap has/will have much more information on Whitson during this time).

In June, Whitson got four more starts, last appearing in a no-decision against the New York Mets on the 27th in which he allowed three runs over six innings. The very next day he was traded to the Giants along with pitchers Al Holland and Fred Breining in exchange for Madlock, Roberts and infielder Lenny Randle.

As I said in the beginning, Whitson had a strong career after leaving Pittsburgh. He had a career WAR of 21.2, which gives him a place in Pirates draft history. That’s the highest WAR total for any of their sixth round picks in 55 years of the draft.He played 15 seasons, won 126 games and pitched 2,240 innings. His 1990 season saw him put up a 7.0 WAR, which led all National League pitchers, yet he didn’t get a single Cy Young vote. Doug Drabek became the second Pirates pitcher ever to win the Cy Young award that season. In 1989 his 6.5 WAR was third best in the league and he failed to get a vote that year as well.

That lack of Cy Young support during two outstanding seasons shows that Whitson might just be a great obscure player subject after all.