During the 1983 season, left-handed pitcher Larry McWilliams put together a strong season for a Pittsburgh Pirates team that was barely above the .500 mark. In the process, he ended up with one of the highest strikeout marks in team history.

The Pirates acquired McWilliams from the Atlanta Braves in the middle of the 1982 season in an even up exchange for pitcher Pascual Perez. McWilliams was 28 years old at the time, in his fifth season in the majors, though it was just his second full season. He was a starter for the first four years, before moving to the bullpen in 1982. In 27 appearances before the trade, he had 6.21 ERA in 37.2 innings. The Pirates put him into the rotation two days after the trade and saw immediate results.

McWilliams made 18 starts and one relief appearance for the 1982 Pirates, posting a 3.11 ERA in 121.2 innings, with 94 strikeouts. In 159.1 innings for the entire season, he picked up 114 strikeouts. In wasn’t a career high for innings up to that point (he had 163.2 in 1980), but it was easily his highest strikeout total for one season. It didn’t take long to shatter that new personal record.

McWilliams started off 1983 with a shutout in the fourth game of the season in Houston. He dominated the Astros, allowing just two hits, with no walks and seven strikeouts. He faced just one batter over the minimum. It would end up being the first of four outstanding performances for him that season.

After two losses in which he had ten strikeouts in 11.1 innings, McWilliams came back with his second gem. His control wasn’t perfect, but he gave up just one hit over nine shutout innings against the San Francisco Giants, picking up eight strikeouts, while facing three batters over the minimum. The only hit was a fifth inning single by Bob Brenly.

McWilliams finished out the first month with one run over seven innings against the San Diego Padres on April 30th. He had a 1.98 ERA, with 30 strikeouts in 36.1 innings.

May began with back-to-back outings in which he struck out eight batters. He had two more games in the month with seven strikeouts. Overall in May, he picked up his pace from April, striking out 39 batters in 40.2 innings. His ERA went up to 3.32 for the month, but the Pirates still won four of his six starts.

In June, McWilliams hit a rough patch to start the month, had one strong game, then a rough outing on the 28th against the Chicago Cubs to finish the month. His strikeout rate also saw a dip. He had a 4.15 ERA in 43.1 innings, with 29 strikeouts.

On July 3rd, McWilliams lasted just 4.1 innings against the St Louis Cardinals. However, he reached an important milestone for this season. He finished the game with exactly 100 strikeouts. The Pirates had played 74 games at that point, so he was halfway to 200 with more than half of the season remaining.

Before they reached that halfway point, McWilliams still had one start left and he made the most of it. He tossed nine shutout innings in Los Angeles against the Dodgers, giving up two hits, one walk and nine strikeouts, while facing two batters over the minimum.

The strikeouts started to pile up as July went along. He had a total of 26 strikeouts in his final four starts of the month. At this point, he appeared to be well on the way to a 200+ strikeout season. In 162.2 innings over his first 23 starts, he had 135 strikeouts and a 2.99 ERA. With two full months left, the magic 200 mark was within reach.

August started off promising with seven strikeouts in a win over the Philadelphia Phillies. The next three starts provided another rough patch in an otherwise great season. He had just seven strikeouts total in those three outings, with the first two games coming against the Montreal Expos. McWilliams was back on track to end August, picking up 15 strikeouts over the final two games, while giving up a total of two runs in 16 innings.

The Pirates were in St Louis on September 5th and the Cardinals were able to knock McWilliams out of the game in the third inning. He faced 12 batters and failed to record a strikeout. Looking back on that game, it ended up being very noteworthy.

With two starts left, McWilliams needed ten strikeouts to reach the 200 mark. His first opponent proved to be a tough one earlier in the year. The Expos put up five runs over six innings against McWilliams on September 25th, but he was able to get five strikeouts, one more than he had in back-to-back August games against them.

Facing the Phillies in the final game of the season, McWilliams had two strikeouts in the first inning, and added a third in the second frame. The third inning started with his fourth strikeout, leaving him one short of 200. That’s where he would remain. He faced 13 more batters and all of them put the ball in play or walked. With two team games left in the season, McWilliams didn’t have another chance to reach the 200-strikeout plateau.

McWilliams had a 15-8 record in 1983, while the rest of the pitching staff went 69-70. He had a 3.25 ERA in 238 innings and received mild Cy Young support, finishing fifth in the voting. He placed third in the league in strikeouts and second with his four shutouts.

Up to that point, the Pirates had two pitchers who reached 200 strikeouts. Ed Morris set the franchise record (and had the second best total) while the club was still in the American Association. Bob Veale dominated hitters in the 1960s, four times finishing over 200 strikeouts. Both of them were lefties, as was McWilliams, who had an unorthodox delivery coming from his slim 6’5″ frame with long arms to match.

In his 13-year career, the closest McWilliams came to matching his 1983 numbers was the following season when he struck out 149 batters. For one year, he made a run at a mark that only two pitchers in team history had reached in the first 101 seasons of the franchise. 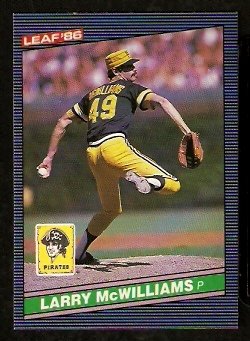 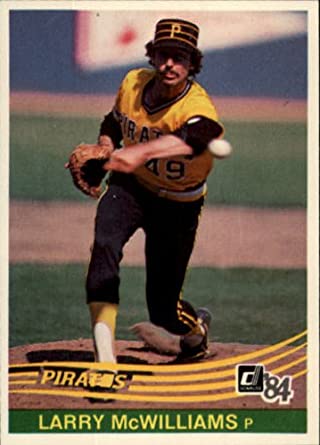