For our tenth Obscure Pittsburgh Pirates article I wanted to do something a little different. Instead of focusing on one player, I wanted to look at two similar pitchers who were traded for each other. Both qualify as obscure Pirates. Jim Hughey pitched for the 1896-97 Pirates, while Bill Hart was in Pittsburgh during the 1895 and 1898 seasons. Even though these two were never teammates in Pittsburgh, you’ll soon see why they work so well together.

Jim Hughey debuted with the Milwaukee Brewers of the American Association in 1891 and pitched two games. He then appeared in the majors next with the 1893 Chicago Colts (Cubs) for two more games. That was his only big league experience when he joined the 1896 Pittsburgh Pirates. Hughey went 6-8, 4.99 in 14 starts and 11 relief appearances that year. He was a distant third behind the tandem of Frank Killen and Pink Hawley, a pair of 30-game winners for the Pirates (twice for Killen), who would combine to win 52 games during the 1896 season.

After the season, the Pirates traded the 28-year-old Hughey and $1,800 cash to the St Louis Browns for Bill Hart. 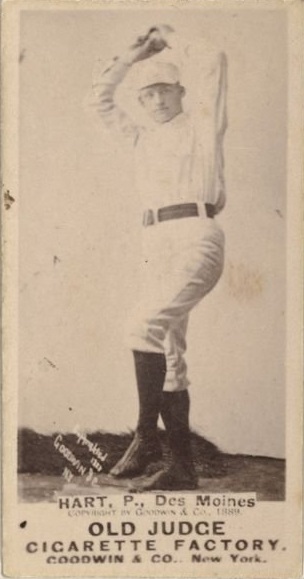 Hart pitched for the Pirates in 1895 and had a 14-17, 4.75 record in 261.1 innings. Just like Hughey, he had sporadic MLB time before joining the Pirates. Hart debuted at 20 years old with the 1886 Philadelphia Athletics of the American Association. After two years there, it was five years before his next big league game. He pitched for the 1892 Brooklyn Grooms (Dodgers), then spent the next two seasons in the minors. After the 1895 season, the Pirates traded Hart to the St Louis Browns for shortstop Bones Ely. Little know fact is that Ely was still the Pirates shortstop after they acquired Honus Wagner in 1899. Wagner didn’t take over shortstop full-time until 1903.

After being traded to St Louis, Hart had two very rough seasons, which I’ll get to shortly. He returned to Pittsburgh in the Hughey trade and went 5-9, 4.82 in 15 starts and 125 innings pitched. The Pirates traded him after the season to acquire Ginger Beaumont from a minor league team, in a deal that had a huge payoff. Beaumont hit .352 as a rookie in 1899, and would lead the NL in hits three years in a row (1902-04).

After leaving Pittsburgh, Hart had just one big league season left, playing for the Cleveland Blues (Indians) during their first season (1901) as a Major League team. Hughey had three seasons left and ended up playing for the 111-loss 1898 Browns, and the record-setting 134-loss Cleveland Spiders in 1899. He finished his big league career with the 1900 St Louis Cardinals (new name of the Browns).

The reason that these players work so well together is that their big league records were awful. For Hughey, a lot had to do with pitching full-time for two terrible teams, though he had a part in how bad they were those years. Hart was on two teams nearly as bad in St Louis. The 1896-97 Browns combined to go 69-192, and Hart was on the mound for 56 of those losses.

Hart and Hughey combined for a 95-200 big league record. Hart went 66-120, Hughey went 29-80. Hughey had some solid minor league seasons, including a combined 46 wins in 1894-95 before joining the Pirates, but his minor league accomplishments pale in comparison to Hart.

Hart pitched pro ball from 1885 until 1910. There are some incomplete stats over the years, but what we do know is that he won at least 296 games as a pro. That’s without three years of stats available. It’s safe to say that he won 300+ games during his 26-year career and he could be closer to 350 wins.

Hart is pictured above in the 1887-90 Old Judge set, one of the most collectible vintage card sets that exists. The most collectible vintage set would be the T206 set, made famous by the rare Honus Wagner card. Hart also appeared in that set during his final season in pro ball. His Old Judge card was released in 1889, while the T206 card came out 21 years later. Here’s that card: 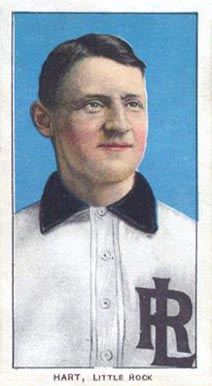