During a 1969 baseball centennial voting, Pittsburgh Pirates Pie Traynor was voted the all-time best third baseman in Major League history. Seven years later, Topps included a subset of The Sporting News All-Time All-Stars in the middle of their regular yearly set. Pie Traynor one again was named the best third baseman in baseball history and received card #343 in the set.

The front of the Traynor card shows him in a classic throwing pose. 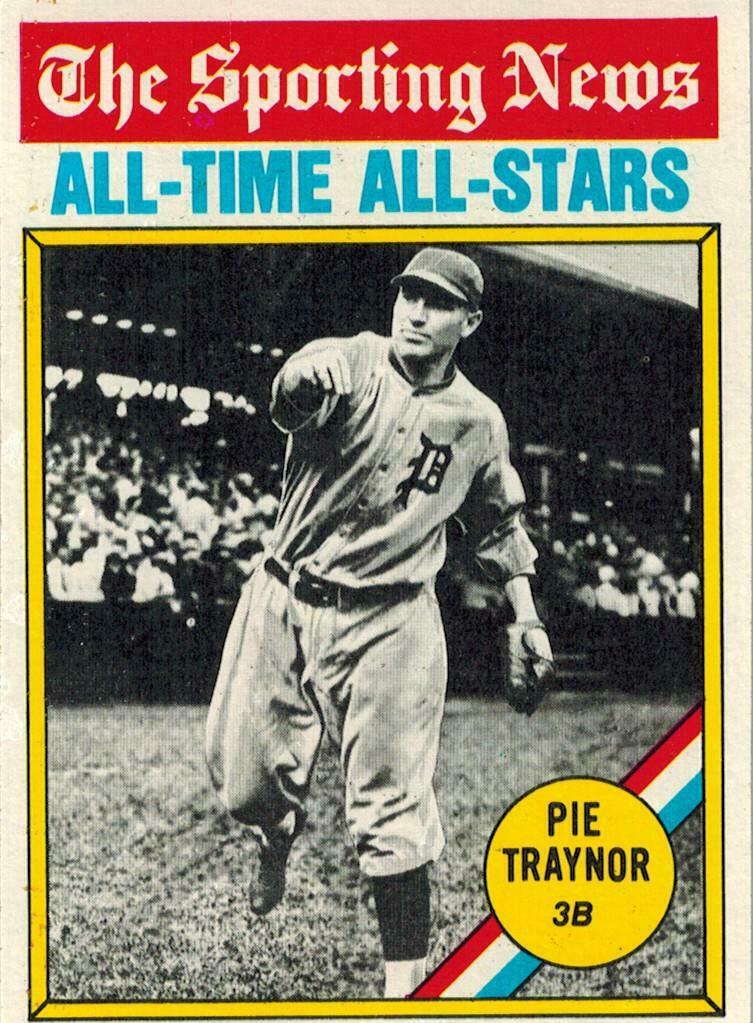 You can date the year of the photo on the card to 1922 because that’s the only season during his career that the Pirates used a “P” symbol on the jersey front in old English writing.

Here’s the back of his card, complete with lifetime stats 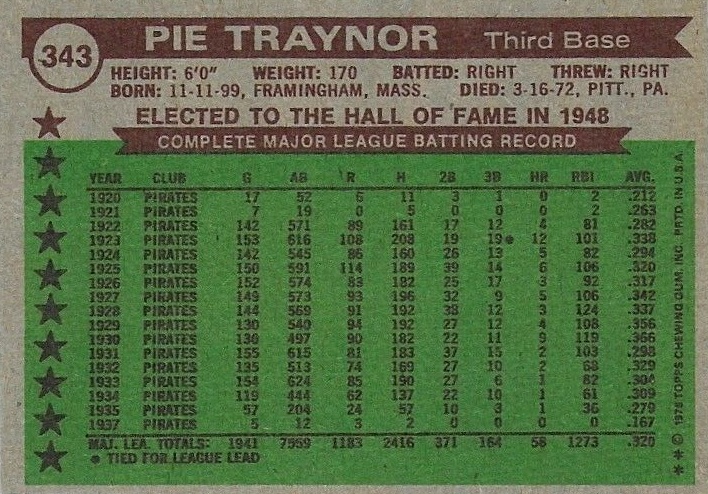 Traynor is one of those players whose stats don’t stand up to the test of time. His career 37.3 WAR wouldn’t even get him elected to the Hall of Fame today. The problem is that the people who saw him play live had no trouble calling him the best third baseman ever, so there has to be more behind it.

Part of the problem seems to come from the defensive side. He was a recognized during his day as an elite defensive player, yet his career dWAR is just 2.0? No one who saw him regularly would have agreed that he was slightly better than a replacement player on defense. His numbers were hurt by some injuries later in his career, but the best years don’t seem to get proper recognition. I’ve noticed some discrepancies in the old defensive stats over the years that don’t match what everyone else saw.

Hal Chase is a great example. He was known for his outstanding defensive work at first base, but dWAR ranks him as one of the worst defensive players ever with a -15.3 career. That’s almost unexplainable. Plenty of people who saw him called his the best defensive first baseman they ever saw. Steve Brodie was known as a top center fielder during his day in the 1890s, yet he has a -3.9 career dWAR? The Pirates gave up one of their best hitters ever (Jake Stenzel) just to get Brodie’s defense in center field to help them out. No way they trade Stenzel’s bat for a below average fielder.

Traynor had a career 41.3 WAR on offense, which is a solid output for 13 full seasons in the majors. He was actually 41.6 during those full seasons. Add in the defense that matches what everyone else saw and he would look like a solid Hall of Fame candidate. The writers who saw him play regularly gave him a lot of MVP support during his day. From 1924 when the NL started voting, to Traynor’s last full season in 1934, he received MVP votes in eight of those 11 seasons, never finishing lower than 13th. In fact, he didn’t get any MVP support in 1930 when he batted .366 with 119 RBIs. He also got no MVP votes in 1934 when he was the starting third baseman for the NL All-Star team.

Regardless of current metrics, Pie Traynor was voted as the best third baseman in the first 100 years of pro baseball and his 1976 Topps card shows off that honor.