Back in February and March, we posted four articles highlighting Pittsburgh Pirates minor league teams from the 1980s, which were featured on minor league card sets produced by a company called ProCards. I bought eight total Pirates sets, which can be found for about $5 each on eBay if you’re patient in your search.

The previous articles took a look at the interesting players/personnel in the sets and featured images of their cards, along with a brief story of their career. I wanted to continue that today with one of the four remaining sets that have yet to be featured here. Today’s set in the 1987 Salem Buccaneers of the Carolina League.

The Buccaneers finished the season with an 80-59 record, winning the north division by 8.5 games. They defeated the Kinston Indians 3-1 in the league championship. They are a great example of minor league winning not equaling true minor league success. The team had a total of seven future Major League players, which isn’t a bad number, but Jeff King was easily the best of the group and there’s not a close second best among the other six players.

We start our look at the team with the Major League players. Just three of the seven future big leaguers were there on picture day. Scott Ruskin, Jose Melendez, Mike Walker and Paul Wilmet all joined the team later.

Jeff King was the big player at Salem in 1987. He was the first overall pick in the 1986 draft and 1987 was his first full season of pro ball. King didn’t disappoint. He hit 26 homers in the first 90 games of the season and was promoted to Double-A. It took him a little while to get established in the majors, but he had some big seasons during an 11-year career in the majors, hitting 154 homers and driving in 709 runs. Here is he minus the trademark mustache.

Bill Sampen was a 12th round pick of the Pirates in 1985 and he eventually made it to the majors in 1990 after the Pirates lost him to the Montreal Expos in the Rule 5 draft. He pitched five seasons in the majors, posting a 3.73 ERA in 299.1 innings. He was a starter for Salem in 1987, then mostly pitched in relief in the majors.

Matias Carrillo also debuted elsewhere after being lost in the draft, though he wasn’t a Rule 5 pick. He was a minor league pick during the Rule 5 draft after the 1987 season. He played briefly with the Brewers in 1991, then saw more time with the Florida Marlins in 1993-94. His baseball career was epic, even though his big league career wasn’t much. He debuted in Mexico in 1982 and last played in 2009, then went right into managing in Mexico. 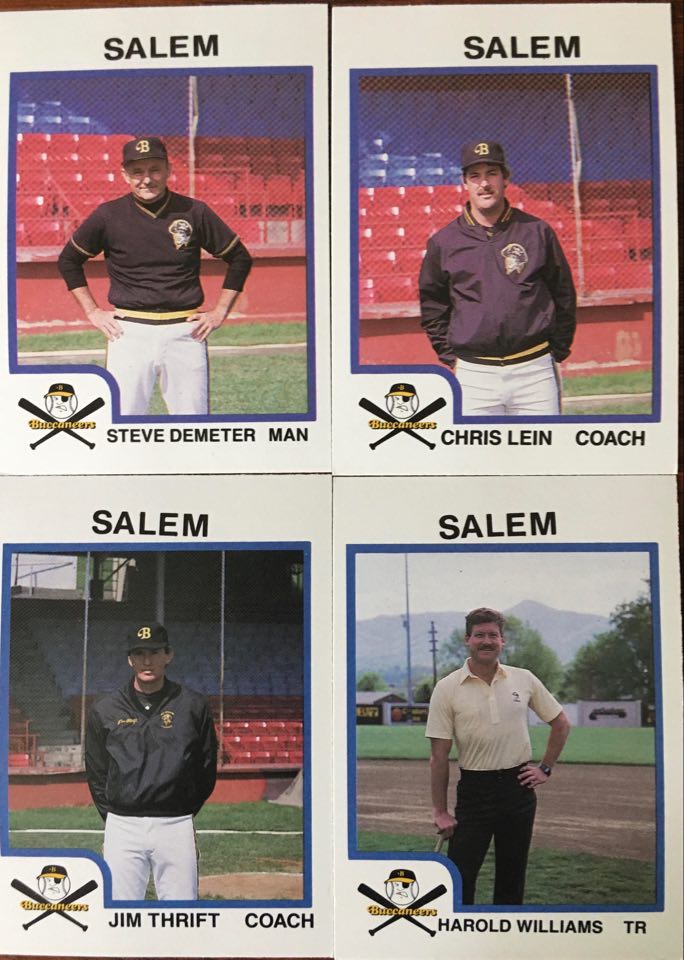 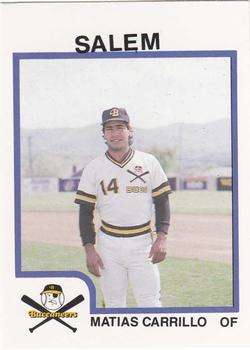 The manager of the 1987 Carolina League champs was Steve Demeter. He had two cups of coffee in the majors as part of a 19-year career as a player. Then he became a minor league manager for the Pirates for nine years. He later coached, then returned to managing for one year, with that year being the 1987 Salem Pirates. He went directly from managing to becoming the Pirates scouting director in 1988. Demeter passed away in 2013. His grandson is the ever popular Derek Dietrich of the Reds.

Coach Jim Thrift played one season in the minors and then coached for five seasons in the minors, two with the Pirates. He was originally an 18th round draft pick of the Pirates in 1981, but did not sign. He became a scout after his coaching days. His father was Syd Thrift, who was the GM of the Pirates from 1985 until 1988, helping build the teams that won three straight NL East titles.

The Salem trainer was first mentioned here for his odd card in the Nashau Pirates set (link below), which just called him “H” Williams. I had to go to Jeff Banister to find out his name back then, which was before I acquired the Salem set. No interesting story behind the “H” nickname, it was short for Harold, which is written out on his Salem card. 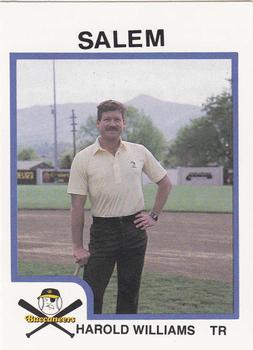 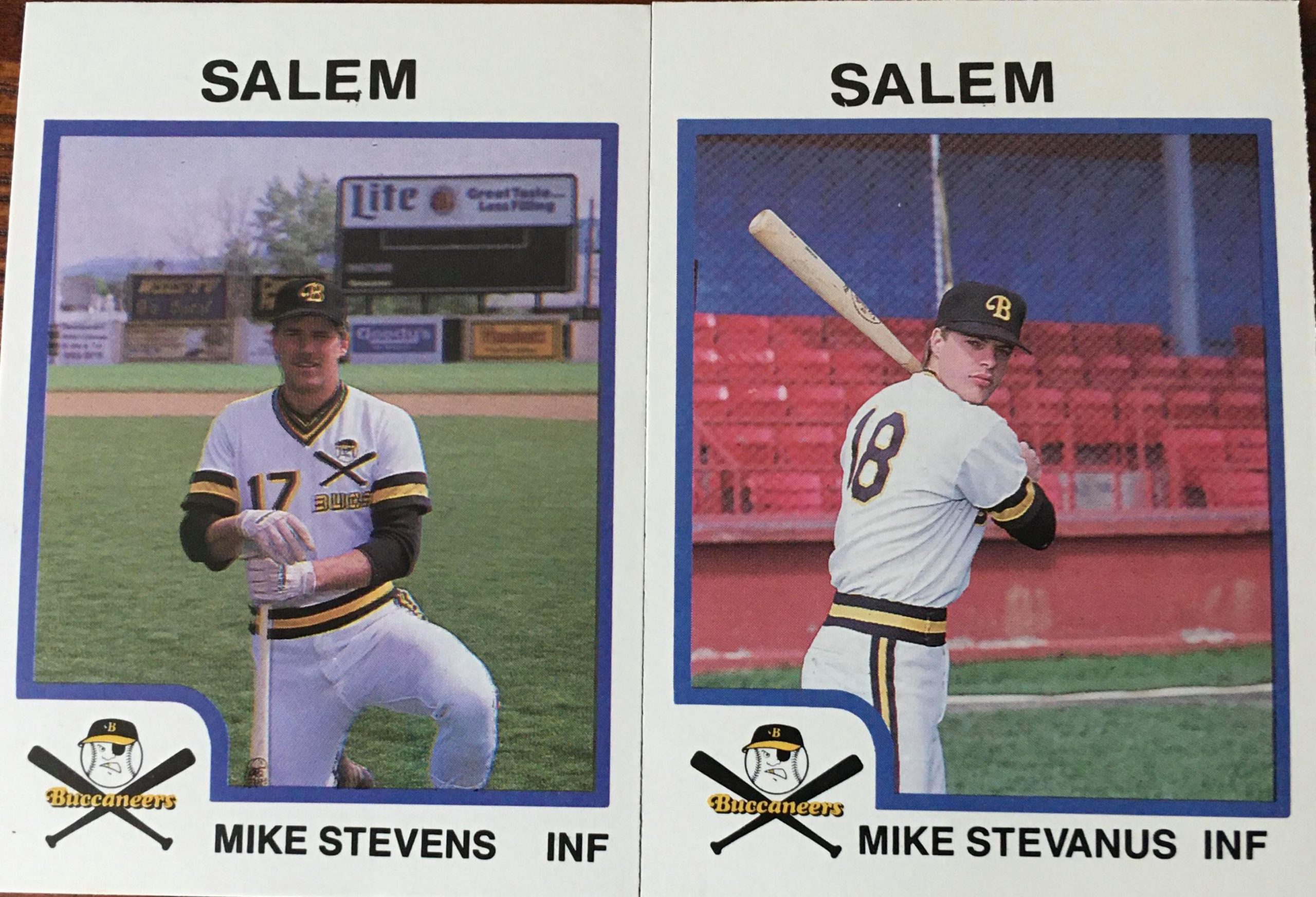 As for some interesting non-MLB players in the set, we start with Mike Stevens, mostly because he had just seven minor league games left on Opening Day of the 1987 season. Depending on when this photo was taken, he was either very close to playing his last pro game, or may have unknowingly already played it.

Mike Stevanus isn’t Latin for Mike Stevens, and it wasn’t the name used by Mike Stevens after he trimmed off his mustache and got a tryout for Salem after he was released. Stevanus was a middle infielder, who would soon switch to relief pitching and post a 2.55 ERA in 42.1 innings during his first year on the mound. His second year didn’t go as well and that ended his career.

Pete Rice started as an outfielder in 1980, switched to pitching in 1982, then became a first baseman in 1987. The Pirates traded him in the middle of 1987 for big league outfielder Terry Harper. Rice’s actual name is quite a bit different than the “Pete” he was known by in the minors. His real name is Arlanda Cepedia Rice.

Tony Chance played pro ball for 20 years and never made the majors. He began with the Pirates in 1983 and last played in independent ball in 2002. His father Bob Chance played parts of six seasons in the majors. The Pirates traded Chance in June of 1989 for big league pitcher Mike Smith, who lasted 16 games in Pittsburgh before being released.

Martin Hernandez pitched just two seasons with the Pirates, ending his affiliated pro ball career with Salem in 1987. However, he played in his home country of Mexico until 2003. His career in pro baseball lasted 21 seasons.

Finally, we have catcher Mike Dotzler. He didn’t have much of a career, playing five minor league seasons, topping out at Double-A. He’s interesting for a different reason. His name is spelled Dotzher on the card front and back and it was never corrected. He was in four other minor league sets and they all got his name correct.

Here are the rest of the players in the set, listed in number (on the card) order:

Here are the previously released articles: