We have been posting Card of the Day articles showing Pittsburgh Pirates players for the last two months. I’ve limited them to two per week, but once the Pittsburgh Baseball Network launches, we plan to post this feature about five times a week on the Pittsburgh Baseball History site. The work stoppage pushed the launch of PBN back, so we started rolling out some of the history features early.

A good friend of mine named Kevin Cummings collects Old Judge baseball cards. He goes into detail about the set below. His focus is players from the set with an interesting story. It’s not a set where the average person can try to acquire the entire set. Common cards in the set in average condition will run $200+, and many of the players are scarce, which runs the price up, because you have a handful of copies for a large group of collectors. The cards of Hall of Famers regularly run into four-digit price tags. There are cards in the set that are one-of-one known and have sold for six-figure prices in auctions and private sales.

I asked Kevin for an article about a card featuring a Pittsburgh Pirates player, or in this case since it was 1887, a Pittsburgh Alleghenys player. It turns out that this player had a “pirates” reference attached to him years before they started being called the Pirates in 1891 by the writers in some other National League cities (Boston, Chicago and Philadelphia used the phrase often). The Pirates name wasn’t accepted by the team until 1895, and even then it wasn’t official. In 1912, they finally put the name on the jerseys, but that was just a year after they thought about changing the team name.

Kevin didn’t have a scan available of his own card off-hand, so I used a scan of my Sam Barkley card. Barkley has seven poses in the Old Judge set. This particular one is pose #2 in the catalog, referred to as “catching, right hand above head”. Some of the cards in the set have numbers on the them, but they stopped that practice during the production of the set and not every number is represented, so the set has been catalogued in alphabetical order instead. This particular card is numbered “0206” on the card, though the catalog number is actually 19-2. This particular pose was also reissued in 1888 to show him on Kansas City, though only the caption changed.

I normally hate pinhole damage on old cards, though you can find hundreds of Old Judge cards that have them. I accept them on some cards that are tough to find from the set, as long as the pinhole doesn’t affect the player picture. Those pinholes are likely how some cards were able to survive 132 years. This particular pinhole is comical to me because it appears that he’s stretching to put the ball through the hole at the top of the card. 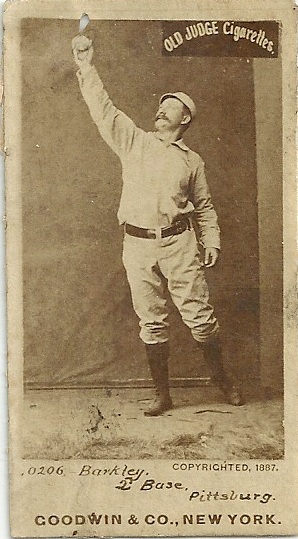 Old Judge Cigarette photographic baseball cards began to be issued in the second half of 1886. Goodwin & Company, an American tobacco manufacturer from New York City, was among the first businesses to employ trading cards to promote their brands. Sepia-toned original albumen photographs were copied onto large proof sheets, glued to a heavy cardboard backer, and hand-cut into their 1 7/16 inch by 2 ½ inch size for insertion into Goodwin’s 10-cigarette slide-and-shell packages. The issue is known by its classification of N172 in Jefferson Burdick’s American Card Catalog, a reference book for American trade cards produced prior to 1951. The Old Judge series (crafted until 1890) was the first major set of baseball cards, comprising now 523 players and over 2,500 blank-backed pose variations making it the largest set of baseball cards ever produced.

Lifelong Wheeling, West Virginia resident, Sam Barkley played six seasons in the major leagues. He broke in with the Toledo Blue Stockings of the American Association in 1884 batting .306 and leading the league in doubles. His batting success never approached that level again, but his gifted glove work at second base continued. Playing baseball at a professional level might have been enough for history to remember him, but a controversy over one of his team changes certainly did.

In March 1886, the St. Louis Browns, with whom Sam had signed in 1885, had secured a deal to send him to the Baltimore Orioles, with whom Sam signed a non-binding agreement. The owner of the Pittsburgh Alleghenys, however, matched the Baltimore offer and convinced Barkley to sign with his club instead. The American Association suspended and fined Barkley for signing with Pittsburgh before the details of his sale to Baltimore had been worked out. In a move that predated Curt Flood’s reserve clause actions by over 80 years, Barkley had an injunction filed in a Pittsburgh court that would have prevented all intraleague play with Pittsburgh unless he was on the Pittsburgh team.

This incident prompted some sports writers to refer to the Pittsburgh team as the Pirates in reference to Pittsburgh “pirating” Barkley away from Baltimore. There is no clear information, however, when the team officially became the Pirates, but it was likely not until after the turn of the 20th Century. Barkley also managed the American Association Kansas City Cowboys for about half of their 1888 season. After his career in baseball ended, Barkley went on to be a cigar maker.