During his first two seasons in the big leagues (1962-63), the Pittsburgh Pirates used left-hander Bob Veale as a both a reliever and a starter. He didn’t debut in the majors until well after his 26th birthday and it took two years to become a trusted starter.

After posting a 1.04 ERA in 77.2 innings during the 1963 season, the Pirates felt that Veale was ready to be a full-time starter in 1964. He would go on to win 18 games, lead the National League with 250 strikeouts, and he threw 279.2 innings. You could argue that it was the best season of his 13-year career in the majors. The 1965 season was nearly as good, and one that was a bit more noteworthy in Pirates history.

In 1965, Bob Veale picked up 276 strikeouts, second only to Sandy Koufax in the National League. That remains the highest total in team history while in the National League. The franchise record is 326 by Ed Morris, who put that total up during the 1886 season in the American Association. Morris also holds the second highest total in franchise history with 298, which he accumulated during the 1885 season. Morris was also a lefty, so Veale doesn’t even have that record. That being said, we are talking about the most strikeouts in a season over the last 133 years for the Pirates, so it was quite an accomplishment then and still stands as a modern benchmark today.

Veale opened the 1965 season with an outstanding pitching performance. It’s one that was right up there as his best game of the year, and he did it at home on Opening Day. He threw ten shutout innings on three hits, one walk and ten strikeouts. The next two games weren’t that good. Over ten total innings, he gave up five runs and had six strikeouts. He was back on track in his last April outing, throwing a complete game shutout.

Veale opened May with a mediocre performance, four runs over seven innings, but it came with nine strikeouts. He struggled over 3.1 innings in his next start, then pitched in relief the next day, facing two batters. Through two more starts, Veale had a 3.74 ERA and he wasn’t really on a record setting pace with the strikeouts. Then came the streak.

Over five games from May 23rd to June 10th, he threw five complete games, two of them being shutouts. In 45 innings, he had 51 strikeouts. Included in that streak was a 16-strikeout game on June 1st, which stands as a team record for a single game.

Veale then hit another rough patch, struggling through three straight starts. His June 27th performance snapped that skid. He tossed a complete game and struck out 11 batters.

July wasn’t exactly a good month, though he kept up the strikeout pace. In 45.1 innings, he had a 4.08 ERA, 31 walks and 48 strikeouts. He finished the month with 14 strikeouts in a loss to the Phillies on July 29th.

August included two more big strikeout games. He started the month with 12 strikeouts over eight shutout innings on August 4th. He ended it with 12 more strikeouts over a complete game shutout.

The month of September included seven starts in which he struck out at least six batters in each game. He matched August with two 12-strikeout performances, including a one-hit shutout in ten innings against the Phillies, which Veale said afterwards was the best game he’s ever pitched. That game was also the one in which he eclipsed his previous strikeout total from 1964. It received very little recognition in The Pittsburgh Press, with a little blurb off to the side saying “Veale now has 261 strikeouts and has broken his own record”.

Veale had nine double-digit strikeout performances over the course of the season. He ended up with 276 strikeouts in 266 innings. Perhaps even more impressive is that he allowed just five home runs all season, with only one coming at Forbes Field. 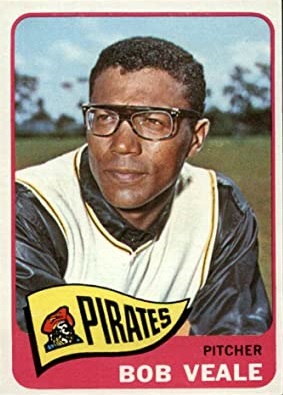