We have posted two Pittsburgh Pirates Memorabilia articles already. It’s a feature that allows fans to show off some of their Pirates-related memorabilia and tell the story behind the item. Our first submission was a 1946 team signed ball owned by Jarrod Ranone. The second installment was an 1887 scorecard used by a fan during the first cycle in Pirates franchise history. That article was written by Joe Gonsowski, a Detroit collector, who focuses on 19th century items. In our third installment now, we have a return guest contributor, Martin Healy Jr.

Healy co-authored (along with Richard Armstrong) a book titled  George “Mooney” Gibson: Canadian Catcher for the Deadball Era Pirates. I already knew Martin from a vintage baseball card message board that we both frequent, and I knew about his player of interest. George Gibson was the catcher for the 1909 World Series winning Pirates. He was teammates with Dots Miller, who is my favorite player from the era. That led to Martin posting an article here on how Gibson became a player of interest for him and a subject of a book.

Today he tells the story about how he found out that a George Gibson model glove existed, followed by how he was able to add it to his collection.

As a collector of early 20th century baseball memorabilia, I have come to understand I may never find my holy grail. In fact, I don’t even know what my holy grail is, or if it even exists. In observation of other collectors focusing on the deadball era, I find myself elated when they acquire their ultimate aspiration. For example, when our friend, Mr. John Dreker, revealed he obtained a 1909 Dots Miller game worn baseball uniform, a hearty congratulations was made in short order. What a find. Just as John is a player collector of a deadball era Pirate, I am too. I collect 1909 World Champion Buc catcher, George “Mooney” Gibson.

Now, a Gibson game worn uniform would certainly constitute holy grail status for me, but the likelihood of its existence is obviously low. So, until just a couple of years ago, I figured my Gibson collection would consist mostly of tobacco and caramel cards with a few type 1 photos scattered in (type 1 photo – images printed at, or near the time of capture). That’s when I came across the website, vintagebaseballgloveforum.com. The site is dedicated to vintage gloves, and their collectors. 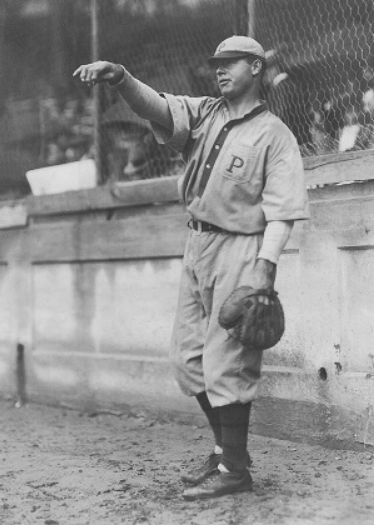 While navigating the website’s archive, I stumbled upon a thread which profiled a Rawlings mitt from circa 1915-20. The old leather hand covering had a player’s name printed on it, the glove was called, ‘The Gibson Mitt.” Even though it was not game used (at least by Gibson), I found my next collecting goal. And Wow! It unquestionably felt like my holy grail.

Research began. I came across an advertisement in an old Spalding Guide which explained the mitt. “The Gibson Mitt is the original scoop model and was designed and made expressly for that famous catcher Mr Geo. Gibson during his time as a catcher for the Pittsburgh National League club.”

With further internet sleuthing, I discovered that the particular glove featured on the forum was the only known where the embossed print of Gibson’s name was still legible. Needless to say, I needed that glove to be in my collection. 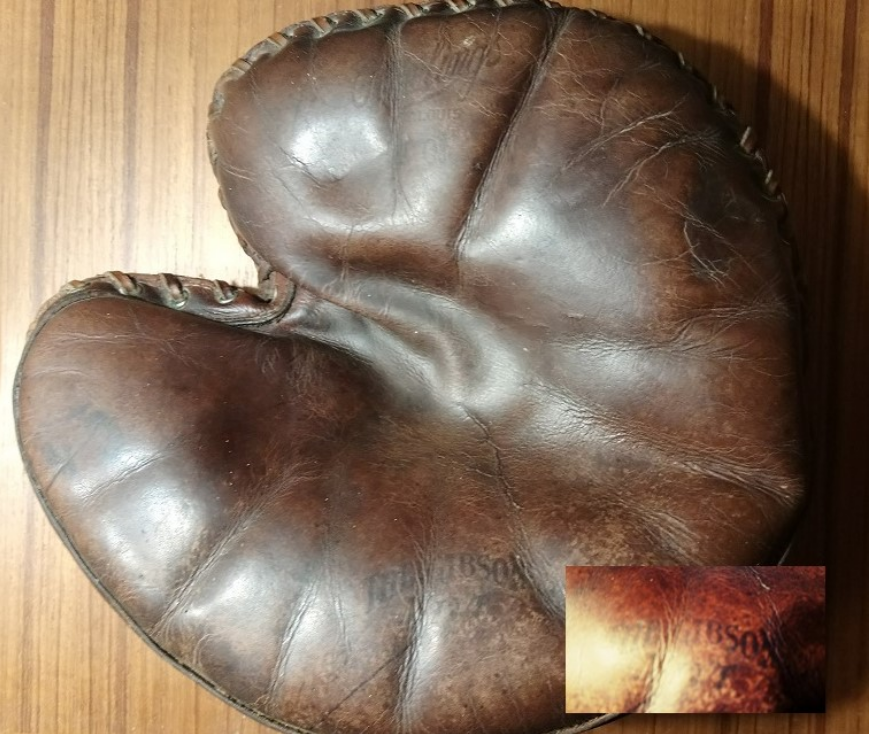 I sent out feelers on the forum to see if any members knew the owner of the mitt. The website’s moderator responded to my ad, and bluntly stated that the owner was unlikely to sell. I pleaded with the moderator to send him a message on my behalf, and after a bit of convincing, he finally agreed to help me out. An answer came back swiftly: “not for sale.” My heart sank, but I knew the glove existed, and at the time, knowing was good enough.

A few months passed, and that gosh darn collectors anxiety started biting at me. “Ask about the mitt, ask about the mitt.” So I decided to give it one more shot, but this time I’d explain deeper how big of a George Gibson collector I was. The moderator did me a huge favor and directed the owner of the glove to my collector focus page which showcased my collection of Gibson cards and photos. That move paid off. The glove’s owner, a doctor from Cleveland, liked how dedicated I was to one player. He reluctantly agreed to sell me the mitt.

A week or so later, the old leather glove arrived. The holy grail was home. I placed it in a shadow box with a copy of that spalding guide and a Gibson tobacco card. But cursed with the collecting bug, it was only a matter of time before the search for my next holy grail began.