The One Who Got Away: Larry Andersen

This is our third article in a new history series called The One Who Got Away. It’s a look at the players in the past who the Pittsburgh Pirates gave up on too soon. It’s a history feature, so we will be dealing with players pre-2000, who saw very little time with the team before the Pirates sent them on their way.

In the first article, we looked at the Major League debut of Hall of Fame pitcher Dazzy Vance, who got one appearance with the Pirates in 1915 before the sent him to a minor league team. That was followed by outfielder Gene Woodling, who was traded away at 25 years old, a year before he broke out and became a star player for five straight World Series winning teams. He played just 22 games with the Pirates. Those are two great examples of the types of players we will be dealing with here, though obviously there aren’t many Hall of Famers like Vance who the Pirates gave up on too soon.

Today’s player is Larry Andersen, who never actually played with the Pittsburgh Pirates, but he definitely fits the theme of this article. In a Boston Red Sox universe, Andersen is the one who they received in their The One Who Got Away feature. He was traded even up for minor leaguer Jeff Bagwell in 1990.

Andersen was drafted out of high school in 1971 by the Cleveland Indians. He was a seventh round pick, who signed right away and was in Low-A ball before the end of his first pro season. At 19 years old, he played for Reno of the California League, which is one of the best hitter ballparks in baseball now. Back then it was awful as well. Andersen went 4-14, 6.53 in 124 innings, with a 1.80 WHIP. Those numbers aren’t as bad as they sound.

After the Pirates won the World Series in 1979, they traded minor league outfielder Larry Littleton and minor league pitcher John Burden to the Indians to acquire Andersen. This trade really had a chance to pay off big. Burden never made the majors, while Littleton made it to the majors just long enough to go 0-for-23 at the plate in 1981. He did walk three times and drive in a run on a sacrifice fly, so it wasn’t a complete washout.

As I mentioned above, Andersen never played for the Pittsburgh Pirates, but he was around for ten full months. The Pirates kept him in Triple-A Portland for all of the 1980 season, despite the fact that he had a 1.74 ERA in 93 innings over 52 relief appearances. You would think that would at least get him a September look, but the Pirates had other plans that were in place months earlier. 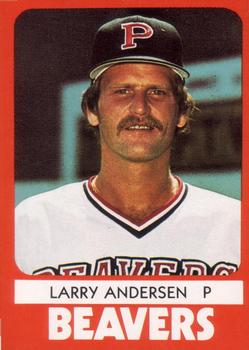 The Pirates gave up nothing of value to acquire Andersen, and they turned him into Odell Jones, who was featured here in one of our Obscure Pittsburgh Pirates articles. Jones, who was with the Pirates in the mid-70s, ended up pitching just 13 games in Pittsburgh after they reacquired him. Considering that Andersen was 27 years old at the time of the deal, with a 5.40 ERA in 22 career big league appearances, that wasn’t really a bad deal. Things didn’t go as planned the rest of the way.

Andersen was one of the top relievers by the late-80s with the Houston Astros, where he had a 1.54 ERA and a 1.79 ERA in back-to-back seasons that included 125 appearances total. He even pitched five shutout innings during the 1986 playoffs.

In a big league career that started with three unsuccessful stints over six seasons (1975-80), Andersen ended up with a 3.15 ERA in 995.1 innings over 699 big league appearances. The Pirates had a chance to see if he was worth keeping after he had that big season at Triple-A in 1980, but they sent him away for another pitcher, who failed to last a full season with the team. That makes Andersen, The One Who Got Away.

4 May 2020
The One Who Got Away
Featured, Larry Andersen