The Pittsburgh Pirates started off the 1912 season with a 4-6 record in their first ten games. They were having trouble scoring runs and manager Fred Clarke decided to do something about that problem. His solution led to the headline “Help Arrives from Cuba”.

The Cincinnati Reds were at Forbes Field on Saturday, April 27, 1912, with approximately 10,000-13,000 fans in attendance. The Reds were off to a terrific start, winners of eight of their first ten games. Two days earlier, Cincinnati won a 1-0 game over the Pirates. The Friday game was rained out, but the skies cleared up for Saturday’s game.

The Cuban help for the Pirates probably isn’t what you were expecting. There were Cuban players in the majors at that time, contrary to popular belief that baseball was completely segregated at this time. In fact, the visiting Reds had two of them on their bench that day, Armando Marsans and Rafael Almeida. They weren’t the help for the Pirates though. The Cuban help came in the form of a new shipment of baseball bats from Cuba.

Fred Clarke was able to convince owner Barney Dreyfuss to pay $2 each for these new bats. According to the Pittsburgh Press, Dreyfuss reminded Clarke on Saturday morning that bats used to cost him 25 cents each, and they way the Pirates were hitting that season, they might as well use a rolling pin because they couldn’t hit anything. Dreyfuss quickly changed his tune on Saturday afternoon.

After a scoreless top of the first, the Pirates put those new bats to work. Pittsburgh loaded the bases with no outs, bringing up Honus Wagner. He hit a long drive to center field, which was caught, but it got them on the board with a sacrifice fly. Dots Miller followed with a two-run single, taking second on the throw home. Chief Wilson followed with a triple to score Miller. Little did they know at the time that Wilson was on his way to the still-standing MLB record of 36 triples in a season. Wilson scored on an Alex McCarthy single and McCarthy scored on a George Gibson double. Six runs were on the board in the first. 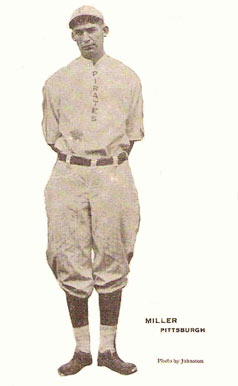 The next 2 1/2 innings went by quickly and quietly. In the bottom of the fourth, the new bats were back at it with a five spot to make it 11-0. The first out of the fourth came on the ever popular 6-8-4 putout at second base on a sacrifice bunt. The Pirates also failed to score a run on a Bobby Byrne single to left field with George Gibson at third base. Gibson held at third and the Pirates would eventually load the bases. A bunt single by Max Carey made it 8-0 when a throwing error allowed two runs to score. Honus Wagner followed with a two-run double, then scored on a Dots Miller single.

The Reds were using their third pitcher by the fifth inning. That doesn’t seem odd by today’s standards, but teams rarely used three pitchers in the same game back then. It didn’t help the visitors. Max Carey singled home two runs in the fifth to make it 13-0.

The Reds began their improbable comeback in the sixth by putting two runs on the board. That’s as close as they got, as Pittsburgh came back with two of their own in the bottom of the frame. With an 11-run lead late, Honus Wagner stole home plate on the front end of a double steal. Alex McCarthy, who now stood at second base, scored on a single by Mike Simon, who came into the lopsided game as a replacement for catcher George Gibson.

In the seventh, Tommy Leach hit a two-run double, then scored on a Honus Wagner single. Dots Miller tripled down the right field line, but was thrown out at the plate to end the inning. Wagner scored to make it 17-2.

In the eight, Chief Wilson hit his second triple of the game, which was his fifth of the season. He scored on a McCarthy single, then McCarthy scored on a single by Byrne. Max Carey singled in starter Howie Camnitz to make it 20-2. Then the Pirates showed absolutely no mercy by pulling off another double steal, with Bryne stealing home this time. Wagner brought in the 22nd run with a single and Dots Miller topped it off with an RBI double.

The final play was Wagner getting picked off third base. You would think it was a sympathy move, but he got in a rundown before the Reds recorded the out. The Reds added two meaningless runs in the ninth, but the Pirates won 23-4, while banging out 27 hits.

Dots Miller went 5-for-6 with three singles, a double, a triple and five RBIs. Honus Wagner went 4-for-5 with five RBIs and three runs scored. Bobby Bryne went 5-for-6 with four runs scored in the lead-off spot. The only batter who didn’t have at least two hits was Howie Camnitz, the pitcher. That includes both catchers, with George Gibson and Mike Simon each collecting two hits.

Here’s the boxscore from this game, courtesy of Baseball-Reference.

Here are links to the previous Game Rewind articles: