Today’s Card of the Day is one that has many variations, though it’s most likely not from intentional changes. Today we look at the 1909 E90 American Caramel Dots Miller card.

Miller joined the Pittsburgh Pirates during the 1909 season and had a great year, helping them to a World Series title as a rookie. He was therefore a popular subject at the time and ended up in numerous card sets. In fact, this particular set has two poses of him. The fielding version is the more popular one, as you will see below. The batting version will be featured here in the future at some point I’m sure. Both poses were popular with the old candy companies, who used them over and over again in sets during that era. The only way to tell some apart is from the back of the cards. Today’s focus is the E90 set.

The designation “E90” is no more than a later way to catalog the sets from early days of baseball. The “E” comes from it being an early candy set, while the “90” was just a random number used by Jefferson Burdick when he decided to compose checklists for all of the old sets. The set is listed as being from 1909 to 1911 and they decided this time period due to the teams players were on in the set. It’s not unusual to find old sets that spanned multiple years, as things were much different than they are now with checklists, numbered cards and new photos every time a new set comes out. Most of the old sets are now numbered/catalogued alphabetically.

As mentioned up top, this particular Dots Miller card has two specific variations, though there is more to it than that once you get into the old printing process. Let’s look at the cards first, then I’ll add more.

Here’s what is called the “sunset” variation of this card. 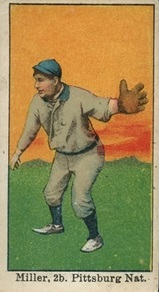 Here’s the other version, which is basically the non-sunset version, or simply put, the regular E90 version. 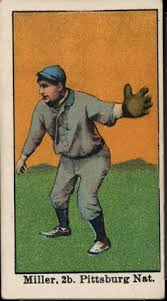 The majors difference is obvious between the two cards, but it’s highly unlikely that it was done intentionally. The red in the sky just above the green is missing on the bottom card. That’s not unusual in old cards to find a color missing. They either ran out of ink during the printing of the card, or just missed a color pass through the printing process.

You can find many cards from this era that were meant to be the same all the way through the entire print run, but since the process was archaic compared to today’s standards, the quality control back then wasn’t always top shelf. This particular card can be found in many shades of yellow/orange that are much easier to notice when next to each other. Even the sunset versions have different shades of red, and some have a wider area covered in the sky.

There’s a second part to this card that gets it attention. Notice that the glove used by Miller looks a little too big. That earned it the nickname “Big Glove”. Sadly, that was no early 20th century prank. It was a bad job by the artist recreating the card. I personally take credit for ruining the big glove story by finding an old photo of Miller from a local NJ newspaper, which they used when he returned home to beautiful Kearny, NJ from the World Series. As you can see in the picture below, he was using a basic glove from the era. 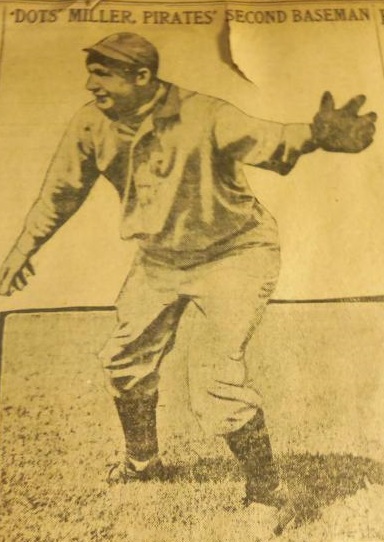 Here’s the back of the card, which was standard for every player in the set.