We recently featured a 1946 Pittsburgh Pirates team signed baseball, as our introduction to our Pirates Memorabilia articles. That ball is owned by Jarrod Ranone from Pittsburgh, PA., and he gave a description of the ball and talked about why he bought it. We have a second Pirates Memorabilia article and this one is from a personal friend of mine who is not a Pirates fan and not from Pittsburgh. He collects 19th century Detroit items, before the Tigers existed, back when the National League was won by the 1887 Detroit Wolverines.

Joe Gonsowski has shared his 1887 scorecard from the second National League game in Pirates franchise history. The first game was played 133 years ago today. This scorecard doesn’t just show any game from their first year, this one is a record of the first cycle in Pittsburgh Pirates history. Outfielder Fred Carroll pulled off the impressive feat, which Joe Gonsowski breaks down below. 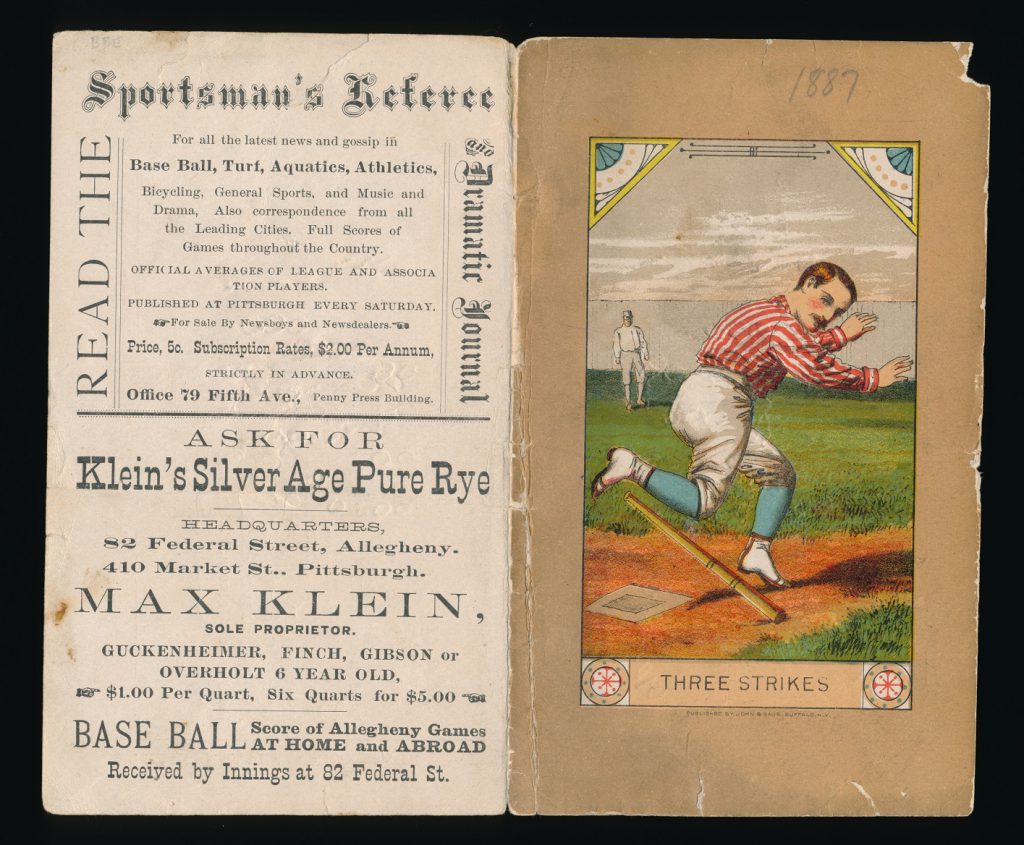 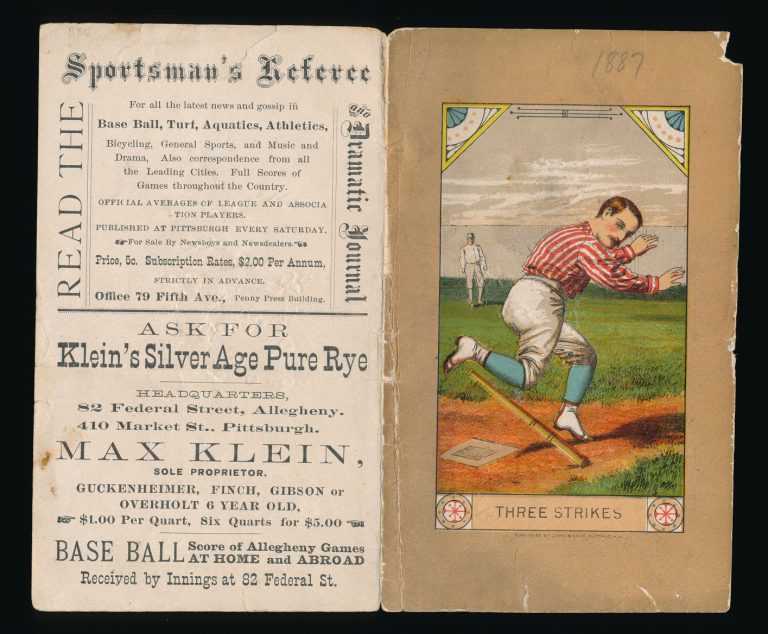 The 1887 season would see the Pittsburgh Alleghany team join the National League as an expansion team (previously members of the American Association, 1882-1886).  They would start their inaugural NL season at home, hosting Chicago followed by Detroit, at Recreation Park.   The first two scheduled contests would be rained out leaving a lone game with Chicago on 4/30/1887, a game Pittsburgh would win, 6-2 (Pud Galvin over John Clarkson, both 300-game winners), in front of 9,000-10,000 adoring fans.

Next up, the Detroit Wolverines, a team that I have collected for over 30 years. The 1887 season would be a special year in Detroit baseball history as they would rise to become Champions of the World.  No one outperformed Detroit in 1887 and they were feeling invincible coming into Pittsburgh with a 30-game win streak between pre-season exhibition and a three game sweep of Indianapolis to start the 1887 NL campaign.

However, Detroit would be greeted by a pitcher/catcher battery of Pud Galvin and Fred Carroll that would prove insurmountable on May 2nd.  Pittsburgh would best Detroit 8-3 in no small part to Galvin’s pitching and Fred’s offensive display in which his first four at-bats played out as follows:

1st at bat, 1st inning:  Fred Carroll hit a two-out single past Deacon White into left field and would score first of four runs for Pittsburgh over the opening inning.

2nd at bat, 2nd inning:  Fred Carroll hits a two-out double but is stranded as Sam Barkley is retired.

3rd inning side note:  Detroit slugger Dan Brouthers sent a ball to deep center where Tom Brown split a finger trying to catch it.  Fred Carroll would move from behind the plate to center field and Doggie Miller would come off the bench to resume catching Galvin.

3rd at bat, 4th inning:  Fred Carroll hits a two-out triple but is again stranded as Sam Barkley is retired.

4th at bat, 6th inning:  Fred Carroll hits a two-out homerun with Galvin at 2nd for two RBIs.  The homerun almost didn’t happen as one pitch prior Deacon White muffed a foul pop-up off Carroll’s bat.  With a 2nd life Carroll sent Lady Baldwin’s next delivery over the left field fence to the loud cheers of 4-5,000 fans.

5th at bat, 8th inning:  Fred Carroll faces Lady Baldwin again with two down and records his lone out of the game.

Another Pittsburgh cycle wouldn’t be recorded until 1901 (Fred Clarke). 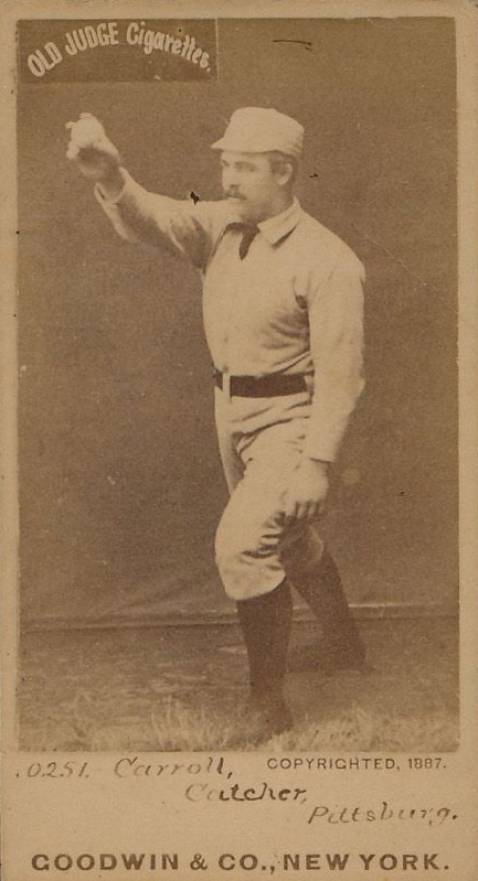 Detroit would lose their first game with Pittsburgh but would bounce back winning 18 of first 20 games and eventually the Championship.  The May 2nd, 1887 scorecard may be the earliest surviving Pittsburgh scorecard.  The game was going to originally feature Ed Morris vs Lady Baldwin, both of whom were 40 game winners the previous season, but Morris was a late scratch as he hadn’t yet recovered from a “lame arm”. 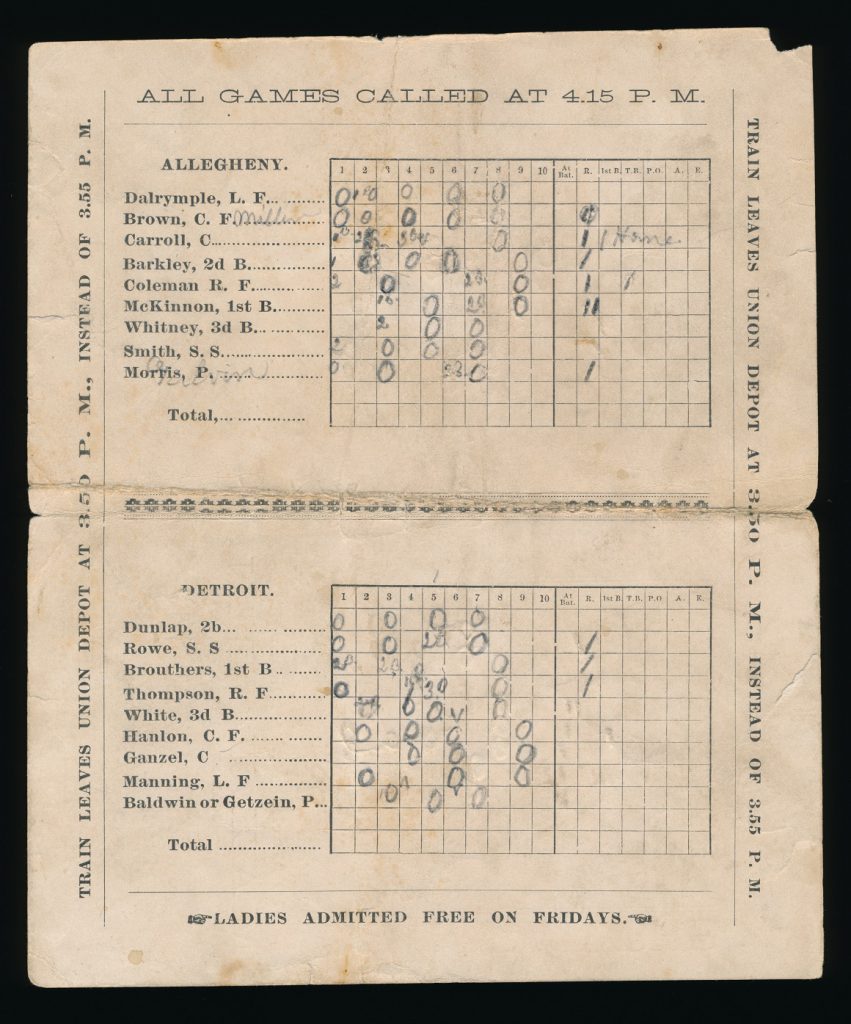 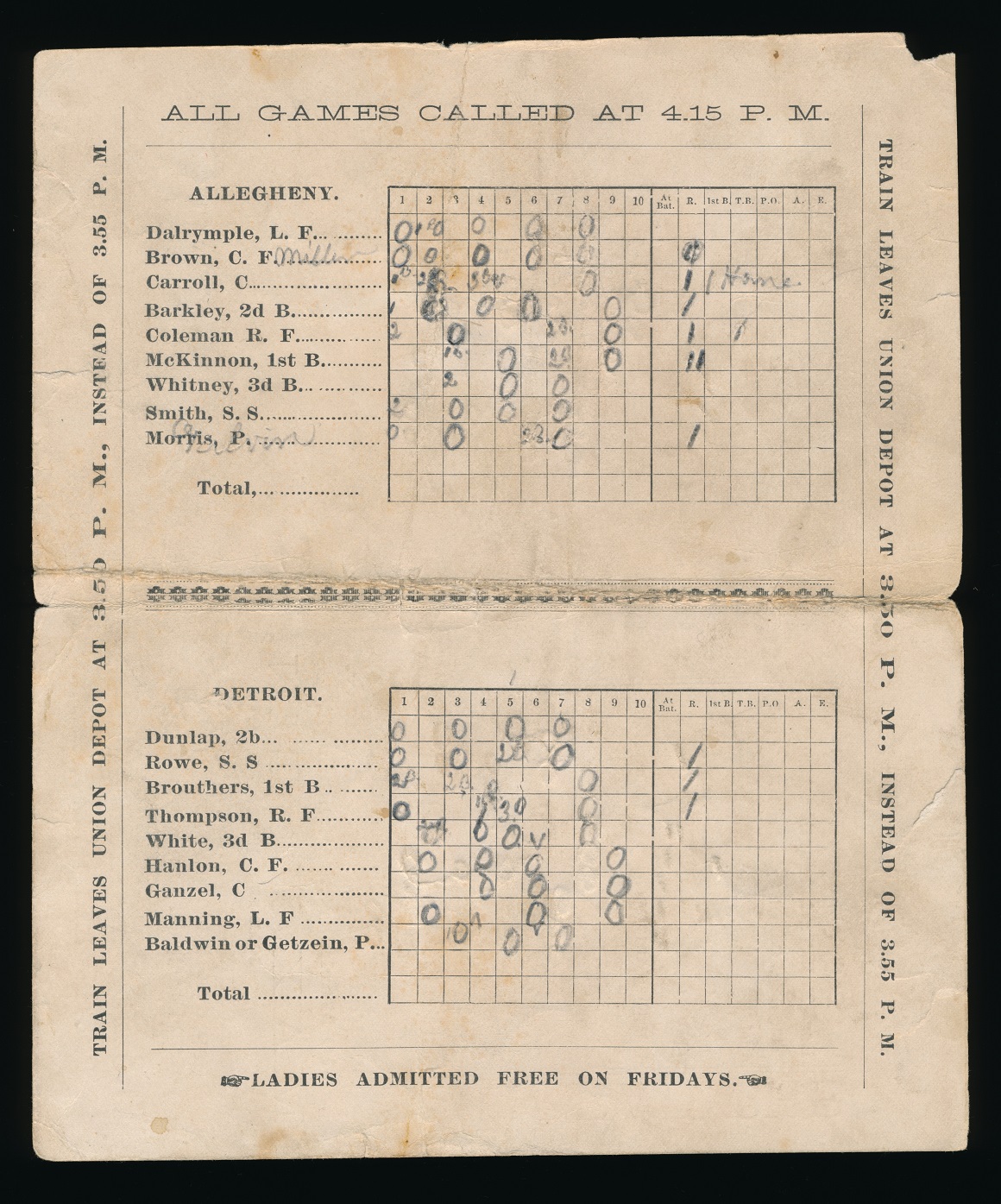 Rather primitive scoring, but you can see “1”, “2”, “3” and a blank entry for the 4th at bat (but the word “home” near the runs column).  While many Cycles have been recorded, few occur on first four at bats in sequence of single, double, triple, homerun.  Fewer, if any, were accomplished with batter stepping into batter’s box with two outs for each at bat.  The clutch, two-out hitting, performance of utility player Fred Carroll on May 2nd, 1887 may stand alone in the annals of baseball history.

Joe Gonsowski collects all items relating to 19th century Detroit baseball. His collection includes other early Pittsburgh scorecards including May 3rd, 1887 (Detroit at Pittsburgh) and May 11th, 1887 (Pittsburgh at Detroit).