Three weeks ago we started a new history feature called Obscure Pittsburgh Pirates. This feature will be a regular article on our upcoming Pittsburgh Baseball History site. The first player we highlighted was infielder George Grantham, who is one of the most underrated players in franchise history. He was followed by Cy Blanton, who put up one of the best pitching seasons in Pirates history. Then we looked at Odell Jones, who spent four seasons with the Pirates between 1975 and 1981. He was followed by pitcher Nick Strincevich, who was with the Pirates for most of the 1940s.

The definition of obscure for baseball players changes with time. We won’t be featuring anyone from the last 15 years or so, even if they played just a few games. There won’t be any star or semi-star players from the 1990-92 playoff teams because most people here either saw them play or heard their names at some point. An obscure player from the 1960s or 1970s may have had 2-3 good seasons with the team. If you go back into the pre-World War II era of baseball, we could highlight almost anyone who isn’t in the Hall of Fame, though there are exceptions. Basically, the older the player, the more they could play and still be considered obscure.

Today’s subject was with the Pirates for just two seasons. He had an interesting back story before joining the club and put up some very strong numbers during his limited time in Pittsburgh. Here’s Reb Russell five years before he joined the Pirates. 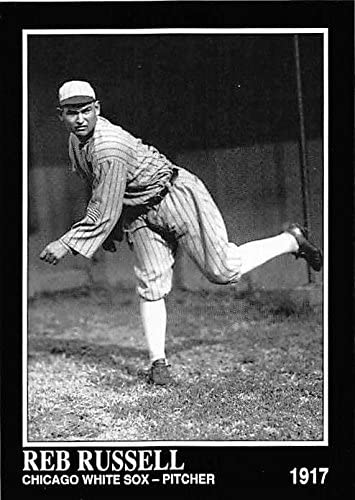 Russell had one of the best rookie seasons for a pitcher in baseball history. He was 24 years old for the 1913 Chicago White Sox when he went 22-16, 1.90 in 316.2 innings. He led the league with 52 games pitched, with 36 starts, 26 complete games and eight shutouts. The only better pitcher than him that season was the greatest pitcher in baseball history, Walter Johnson.

Russell was with the White Sox through the start of the 1919 season, made famous by the Black Sox scandal. In seven seasons in Chicago, he went 80-59, 2.33 in 1,291.2 innings before being released to the minors, where he became an outfielder for the duration of the season. He attempted to comeback with the White Sox in 1920, but after he failed to make the team in Spring Training, he decided to retire.

Retirement didn’t last long for Russell, who was called on to play outfield during the 1920 season by his 1919 team (Minneapolis) when they were short-handed. He put up big stats as a hitter and that eventually led to the 1922 Pirates acquiring him mid-season in a trade.

Russell joined the Pirates on July 21st and immediately became their starting right fielder. He didn’t do much in his first five games, but he put on a show for the rest of the season. In 60 games for the Pirates, he batted .368/.423/.668, with 14 doubles, eight triples, 12 homers and 75 RBIs. That RBI pace over a full season would be a Major League record. The Pirates went 42-17 (one tie) in games that Russell played. They were 43-52 when he didn’t play.

Despite the strong finish, Russell returned to the minors in 1924 and put together another six straight seasons of hitting for a high average and power. He played minor league ball until he was 41 years old, his 19th season in pro ball.