The first Pittsburgh Pirates Seasons article featured one of the best seasons in team history, Hall of Famer Kiki Cuyler’s 1925 season. In part two of this new series, we looked at a great season by Mike Easler that often gets overlooked. In part three, we focused in on one of the best rookie seasons in MLB history. Today we add our first pitching season and it was from a player who spent just one year with the Pirates. 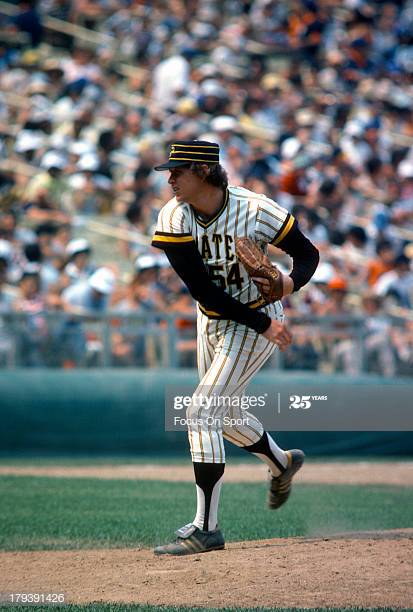 According to two advanced metrics, Goose Gossage had the best pitching season in Pittsburgh Pirates history during the 1977 season. His Adjusted ERA+ of 244 ranks #1 in team history, as does his 5.9 WPA (wins probability added).

For those unfamiliar with the stats, I offer a comparison on the WPA. During his Cy Young winning season in 1960, Vern Law had a 3.4 WPA. Thirty years later when Doug Drabek won the Cy Young, he had a 3.0 WPA. Gossage’s season was almost twice as good as Drabek’s year according to WPA.

Gossage also posted a .170 BAA, which gives him the best hits per nine innings rate in team history (5.278). Gossage’s 0.96 WHIP that season ranks fourth in team history, and it’s the best mark since 1919.

The Pirates acquired Gossage from the Chicago White Sox on December 10, 1976, along with reliever Terry Forster, in exchange for outfielder Richie Zisk and pitcher Silvio Martinez. Gossage led the AL in saves during the 1975 season, then was switched to a starting role in 1976, where he posted a 3.94 ERA in 224 innings. The Pirates switched him back to relief, though his usage wasn’t typical of what you would see now.

Gossage made 72 appearances for the Pirates and pitched a total of 133 innings. He had 49 outings with more than one inning, he went 2+ innings on 37 occasions, and five times he went at least four innings. He threw shutout ball in all five of those 4+ inning outings. He came into 36 games with runners on base, stranding a total of 40 runners, and the Pirates were 50-22 in his appearances.

Goose finished with a 1.62 ERA, picking up 11 wins and recording 26 saves. He had 151 strikeouts, giving him a 10.2 SO/9IP rate, which was a team record at the time. He was elected to his third straight All-Star game appearance.

His stay in Pittsburgh was brief. Gossage became a free agent after the 1977 season and he signed with the Yankees, who gave him a contract/bonus that was 10x what he was making before free agency. It would have been nice if the Pirates could have kept him longer, but things worked out for them. Kent Tekulve took over the closer role and just two years later, Pittsburgh won their fifth World Series title.