This is our fourth Game Rewind article, where we look back at a noteworthy game in Pittsburgh Pirates history. The first two Game Rewind articles featured Willie Stargell’s debut and a big game from Al Oliver and the 1971 Pirates. The third article covered a game that happened 60 years ago today. Today we go back to the season opener of the 1909 season to see how the Pirates began their first World Series winning season.

The 1908 Pirates went 98-56, finishing in second place in the National League behind the Chicago Cubs. They were a very similar team in 1909, returning many of the same players. The 1909 Opening Day starting lineup had two rookies in it, with Ward Miller batting lead-off in center field and rookie Bill Abstein, who had a very brief trial with the 1906 Pirates, playing first base. They were led by the great Honus Wagner, who posted a career best season in 1908. The Opening Day starter was Howie Camnitz, who had a 1.56 ERA in 232.2 innings in 1908.

The 1909 season opened up 111 years ago today, with the Pirates visiting the Cincinnati Reds at the Palace of the Fans, where the Reds played their home games for ten seasons (1902-11). A crowd estimated to be 20,000 showed up for the game. The Sporting Life called it “the largest crowd that ever witnessed the opening of a base ball season in Cincinnati”. A local paper estimated that “nearly 22,000” fans were in attendance.

Those home fans went home disappointed, as the Pirates took a 1-0 lead in the first inning and never looked back. Howie Camnitz was on his game this day and spread out the base runners. He went the distance on six hits, one walk and two batters reached on errors.

The Pirates scored in the first inning, as Ward Miller led off with a triple, then scored on Fred Clarke’s sacrifice fly. The Pirates added a run in the fourth inning on Honus Wagner’s double and they topped off their scoring in the ninth. Wagner and Tommie Leach both scored a run in the 3-0 victory. The time of game was 90 minutes. Pittsburgh collected just four hits in the game. 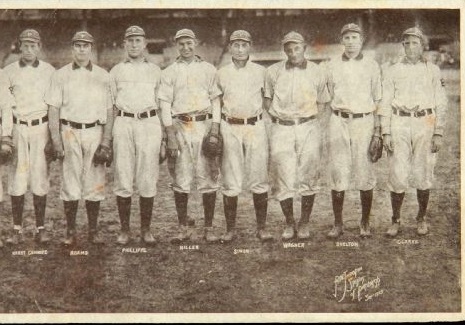 While the season started off well, the lineup did not stay the same for long. Ward Miller lasted just 15 games before he was traded to the Reds. That lead-off triple was his only extra-base hit for the Pirates. The starting second baseman in the opener was Ed Abbaticchio, who went 0-for-4 with both Pittsburgh errors. He went 0-for-15 in the first four games of the season before he was replaced by rookie Dots Miller, who ended up starting the final 150 games of the season at second base.

The Pirates sent six players back to Pittsburgh before the opener who were with the team during Spring Training. That group included pitcher Babe Adams, who wasn’t good enough to make the Opening Day rotation, but he ended up winning three games in the World Series six months later.

One that same day as the opener, the Pirates acquired left-handed pitcher Charles Wacker from the Reds, with the local paper noting that he moved his stuff from one hotel room to another. The 25-year-old had no big league experience at that point and his entire time in the majors would amount to two relief innings against the St Louis Cardinals on April 28th.