The 1946 Pittsburgh Pirates had a 63-91 record. They were 19 years removed from their last World Series appearance and still 14 years away from their next postseason. It wasn’t the most exciting team on paper, but a 1946 team signed baseball is still quite a piece of memorabilia to possess.

This is a sneak preview of a series we will have on the Pittsburgh Baseball History site as part of the Pittsburgh Baseball Network. I plan on giving collectors of Pittsburgh Pirates memorabilia a place to show off their prize possessions and tell us about how and why they acquired them. It will likely be a once a month article, with the possibility of more if there are more people interested in sharing.

Today’s piece is the aforementioned 1946 team signed baseball, which is owned by Jarrod Ranone from Pittsburgh, PA. He’s a fan of Pittsburgh sports and collects sports memorabilia and cards. He’s also the President of the Jack Herman fan club according to his Twitter bio, though we have a few subscribers commenting here who would disagree with that title.

As mentioned, the 1946 Pirates weren’t exciting, though a rookie on that team showed a lot of promise. Ralph Kiner hit 23 homers that season, which led the National League in an obvious down year for power. He also tied the Pirates team record for homers in a single season, which was set by rookie Johnny Rizzo eight years earlier.

The Pirates also had veteran catcher Al Lopez in his 18th season of pro ball. He had just set the MLB record for most games caught, a title he would hold for 42 years.

The manager at the time was Frankie Frisch, who was in his seventh season with the Pirates, leading the team through the entirety of WWII.

One of Frisch’s coaches was the great Honus Wagner, giving the Pirates quite a baseball legend on their bench.

When this ball was signed by 25 men in 1946, Wagner was the only Hall of Fame signature on the ball. He would eventually be joined in Cooperstown by Frisch, then Kiner, then Lopez. 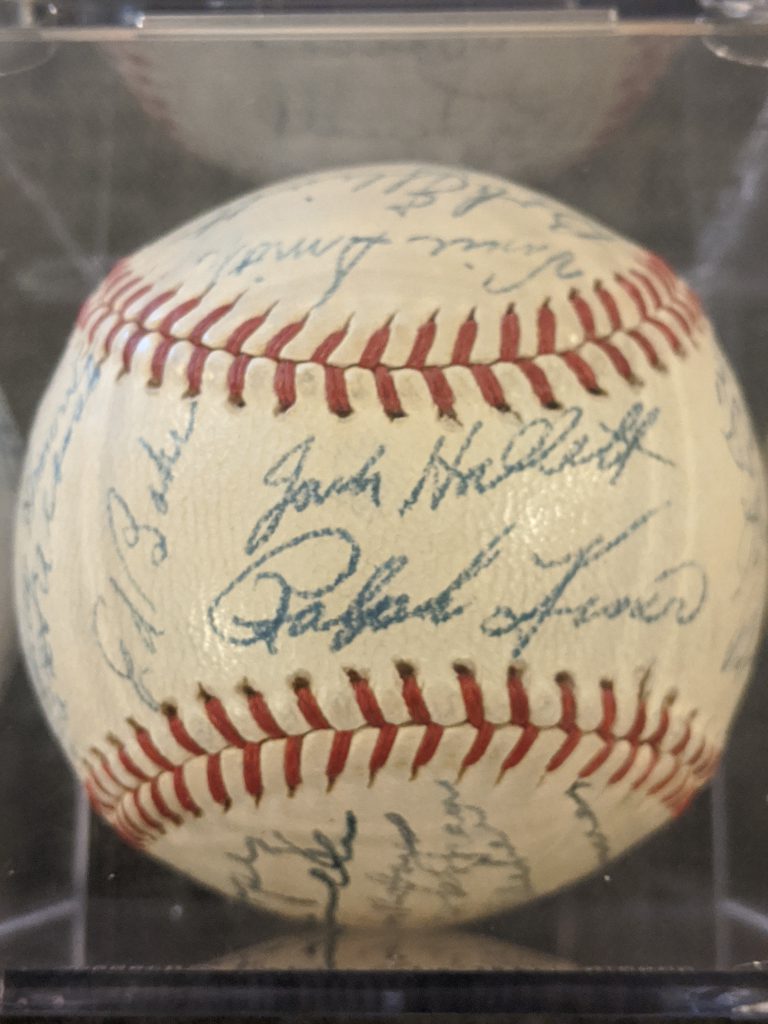 Here’s the story of the signed ball:

I am going to be 34 years old and unfortunately my early memories of the Pirates do not include the early 90s playoff teams. Minus “The Freak Show” of 1997, I remember the Allensworths, Hermansens, Polcovichs, Duffys, and Bullingtons of the world. I did, however, develop a strong interest in history of the franchise. My father and uncles taught me about Wagner, Traynor, Kiner, Groat, Mazeroski, Clemente, Stargell, and many others. The more stories that I heard, the more I wanted to add items from these great players to my collection.

I started collecting baseball cards and autographed memorabilia when I was five years old. My older brother had a binder of 1991 Topps and refused to let me look at them. I do not remember my exact reaction, but I know the very next day, I received my first pack of 1991 Topps from my mom. The rest is history.

Three years ago, my wife and I found out that we were having our second child. We were blessed with a daughter first, but this time we were having a boy. Now I love my daughter, but I was so excited to have a boy that I decided to go after a piece that I was dreaming about for my collection. A Honus Wagner autograph that I could pass along to him. I searched eBay and contemplated if this purchase would cause my marriage to end due to the prices I saw. I was not naive; I knew this was not going to be an inexpensive buy and that I had to get a trusted certification.

So late one night, after having a couple refreshments I found a 1946 team ball that was certified by PSA and came from the collection of former big leaguer Preacher Roe. The ball was in great condition with no fading and featured the entire team, including Hall of Famers Ralph Kiner, Frank Frisch, and Al Lopez. It also included a coach named Honus Wagner. This was the ball, but I was not sure about the price. The refreshments gave me the courage to make an offer that I knew would be declined. The seller messaged me back with a price that I felt less uneasy about. After a couple messages we agreed on a price. 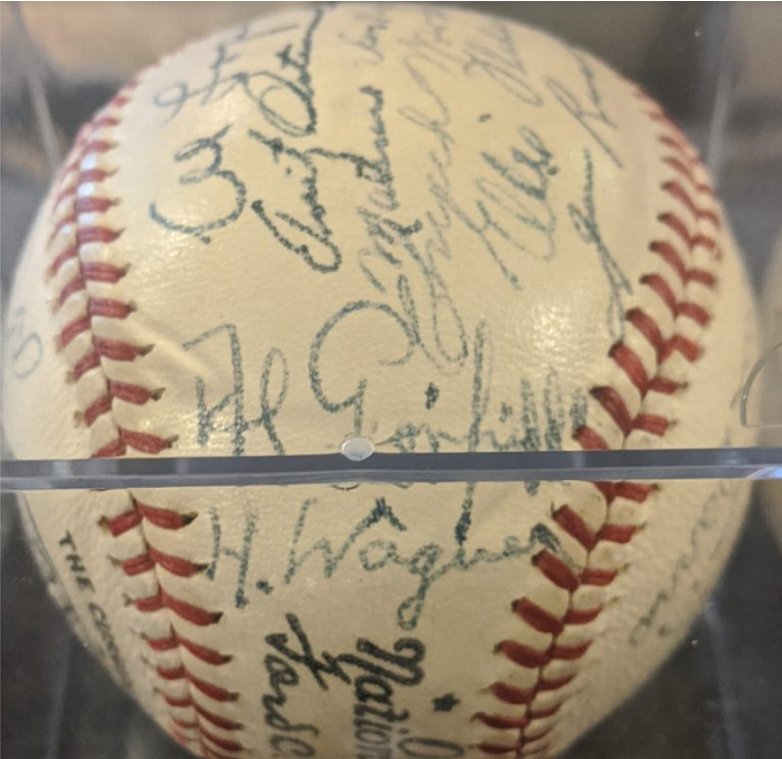 My son is now two years old and far way away from coming near the ball. The ball is in a safety deposit box just to avoid the risk of fire or flood. He loves watching sports and I cannot wait to teach him about the history of this great franchise. The dilemma now is that my four-year-old daughter loves sports as well. I think they will have to compromise because the thoughts of purchasing another Wagner autograph makes my very understanding wife’s eye twitch.

The great part of this ball and my collection is that there is a story and a memory behind every piece. I have always viewed cards and sports memorabilia as pieces of history. As a young father, I am looking forward to sharing these stories with my children. If they are not interested, then maybe my grandchildren will be. If not them, look me up in 50 years, I might have something for you. 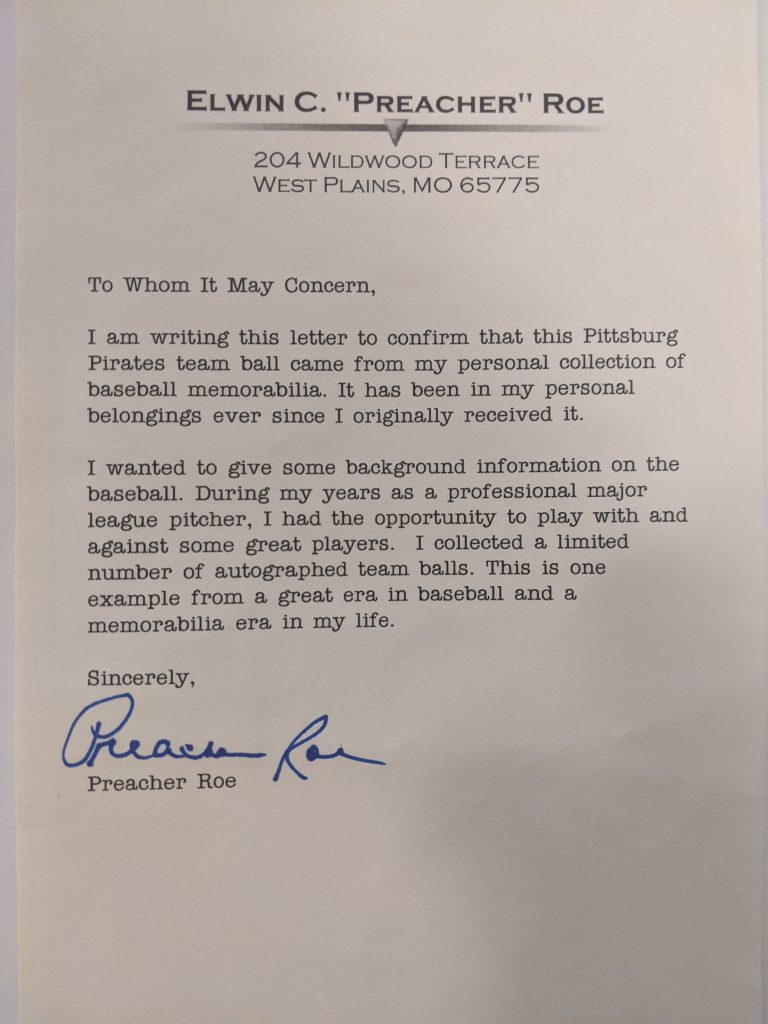