Today’s Card of the Day is one of the most interesting cards you’ll find. The Pittsburgh Pirates were fortunate enough to have the greatest shortstop in baseball history for 18 seasons. He remained on as a coach for many years and saw the Pirates put another Hall of Famer at shortstop in Rabbit Maranville from 1921 until 1924. He was immediately followed by Glenn Wright, who put together a great five-year run with the Pirates at shortstop. In 1932, the Pirates struck gold again at shortstop, bringing in rookie Arky Vaughan, who many consider the second best shortstop ever behind Honus Wagner. This 1936 card designated as the R312 set shows the greatest 1-2 shortstop combo in baseball.

Here’s the front of the card. The back is a plain off-white color with no writing. 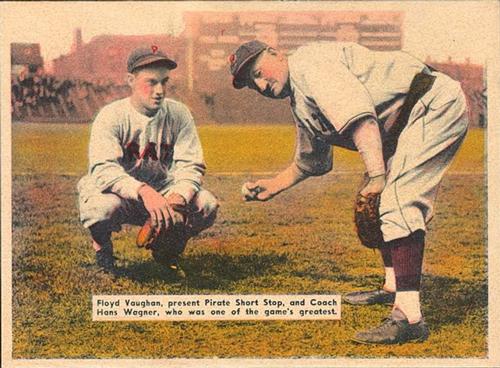 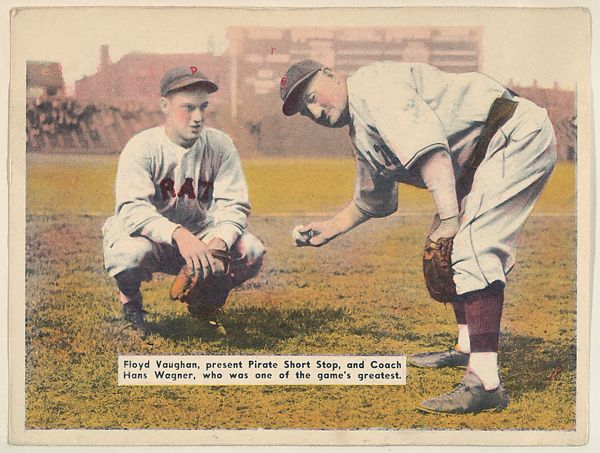 The R312 designation is no more than a catalog system letter/number to differentiate the different types of sets. Tobacco cards had “T” as the first part and a random set of numbers created by Jefferson Burdick to tell sets apart. They also have other examples such as N cards for nineteenth century and E/R cards for early/recent cards put out by gum manufacturers. The term “recent” was obviously thought of a long time ago and doesn’t seem proper today for a 1936 card. This R312 set is also referred to as pastel cards due to the coloring and you will see it associated in some places with either Goudey or National Chicle (gum companies) if you do searches.

Arky Vaughan was coming off of his best season when this card was produced. In 1935, he put up a career best 1.098 OPS, leading the league in batting average, OBP and slugging, as well as walks. Depending on when this card was released, he was 23 or 24 years old at the time. Wagner was 19 years removed from his final season as a player, and either 61/62 years old at the time.

Wagner was brought on at this time to help Vaughan become a quality big league shortstop on defense, so the two worked together often. Vaughan was a great hitter, but what is often overlooked now is that he put up a positive defensive season every year of his career. By 1938 (according to defensive WAR), he was the best defensive player in the National League.

This card reads on the front:

A modern version with these two players would obviously have Arky and Honus, but they were often referred to as Floyd and Hans back then in print. For those who don’t know, “Arky” just comes from him being from Arkansas. His actual first name was Joseph, but he went by Floyd.

As a side note not seen in this card, Vaughan is wearing jersey #21, which should have been retired by the Pirates before Roberto Clemente got a chance to wear it. Now adding the great Arky Vaughan to the retired numbers as “21” would cause backlash I’m sure. He briefly wore #3 in 1940 and then #5 for the rest of 1940 and the 1941 season, so either of those two would be suitable alternatives for someone who deserves the honor. Wagner is shown on a different 1936 card wearing #36, but the Pirates retired #33 for him. Uniform numbers weren’t worn during his playing days.