Two weeks ago we started a new history feature called Obscure Pittsburgh Pirates. This feature will be a regular article on our upcoming Pittsburgh Baseball History site. The first player we highlighted was infielder George Grantham, who is one of the most underrated players in franchise history. He was followed by Cy Blanton, who put up one of the best pitching seasons in Pirates history.

The definition of obscure for baseball players changes with time. We won’t be featuring anyone from the last 15 years or so, even if they played just a few games. There won’t be any star or semi-star players from the 1990-92 playoff teams because most people here either saw them play or heard their names at some point. An obscure player from the 1960s or 1970s may have had 2-3 good seasons with the team. If you go back into the pre-World War II era of baseball, we could highlight almost anyone who isn’t in the Hall of Fame, though there are exceptions. Basically, the older the player, the more they could play and still be considered obscure.

Today’s featured player got here because he was the only player I missed on a Sporcle quiz about starting pitchers for the Pittsburgh Pirates from the 1970s.

Odell Jones was a right-handed pitcher, who the Pirates signed as an 18-year-old amateur free agent out of Compton HS in California. He moved fairly quickly through the system, reaching Triple-A in 1975, where he had a 14-9, 2.68 record in 188 innings. That earned him a September look with the Pirates. He only pitched twice, throwing three scoreless innings. The Pirates didn’t clinch the NL East in 1975 until September 22nd, so innings were limited for young pitchers.

Jones spent the 1976 season in the minors without an appearance for the Pirates. He only made 16 starts in Triple-A and struggled a bit in that time, posting a 4.93 ERA and a 1.47 WHIP. Despite the poor season, he was with the Pirates for the entire 1977 season.

Got them all except Odell Jones in 1977.

Jones had the highest ERA (tied with Larry Demery) for any pitcher on the Pirates in 1977. He made 15 starts and 19 relief appearances, posting a 5.08 ERA in 108 innings. So it’s probably not surprising that he ended up back in the minors for most of 1978.

Jones was a September call-up in 1978, pitching three times, while allowing two earned runs over nine innings. He picked up ten strikeouts.

In the off-season, the Pirates traded Jones as part of a package that brought back Enrique Romo to Pittsburgh. Mario Mendoza was also included in the deal. You could say that Jones helped the Pirates win the 1979 World Series because they possibly don’t win without Romo, who threw 129.1 innings in relief over 84 appearances that season and posted a 2.99 ERA.

After making a great trade to get rid of Jones, the Pirates made a bad trade to get him back. They gave up Larry Andersen and cash to get Jones from the Mariners right before the 1980 season.

Andersen is known for being on the wrong side of the Jeff Bagwell deal, but when the Pirates got rid of him, he still had 677 appearances ahead of him in his big league career. He was a quality pitcher for 14 years after the deal. Jones spent 1980 in the minors, pitched 54 innings for the 1981 Pirates (had a 3.31 ERA), spent 1982 back in Triple-A, then was lost in the Rule 5 draft to the Texas Rangers. To add some salt to the wound (the Andersen trade), Jones posted his best big league season with the Rangers in 1983. 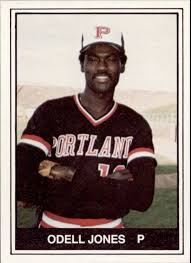