For many years, Topps included multi-player rookie cards in their sets. At times they were grouped by league or position, while other years included players from the same team. Our Card of Day series will include many of these cards in the future, especially since it lines up so well with the Pirates Prospects theme. At one time these players were considered top prospects, although anyone who collects these older cards will tell you that Topps also made some very odd choices of “Future Stars” over the years.

We start today with a card that Topps did a fairly good job on as far as picking players. It’s rare to see one of the three-player cards feature three players who put in significant MLB time. Using the word “star” is a bit of a stretch, but anyone who follows this site knows, even the best prospects don’t always make the majors. 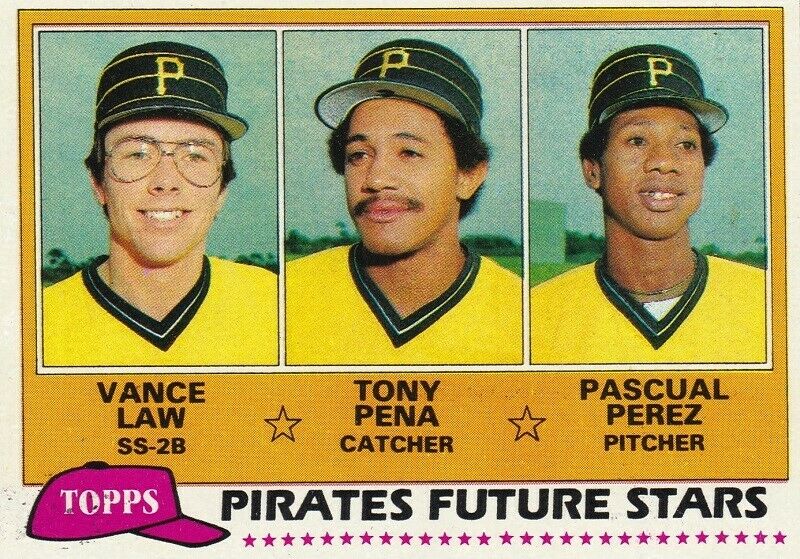 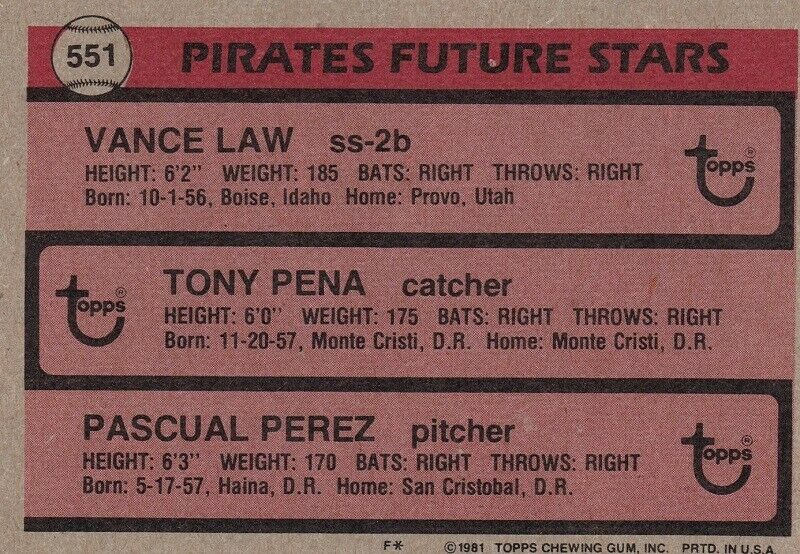 As you can see by the front, Tony Pena was the star player and Topps definitely made a great choice here. The other two choices weren’t bad though. Pascual Perez was an All-Star by 1983 and he had a solid 11-year career. Vance Law is the son of Pirates great Vern Law, featured here yesterday in our Game Rewind series. He didn’t become a household name, but he did put up two big seasons during his 11-year career.

The back of the card didn’t give you much information here. There weren’t many places to check the validity of the picks made by Topps, so it was tough back then to know if those players really had a chance to be stars. The “rookie craze” with baseball cards really didn’t take off until after these cards were produced. Minor league information became easier to find during the mid/late 1980’s because collectors wanted to know the next big rookie ahead of time.

This particular card would a have been sought after in 1985. Pena had already picked up three Gold Gloves and made three All-Star appearances by the end of the 1985 season. At 28 years old, he was just hitting his prime years, though that season was his worst on offense while with the Pirates, so going into the 1985 season was probably the peak for this card’s interest. That’s especially true when we consider where the other two players were at in their careers at the time.

Law had a strong season in 1984 for the Chicago White Sox, the best of his career up to that point. He played 151 games that year and set a career high with 17 homers. Unlike Perez and Pena, the 1985 season was a strong one for Law. He posted a career best 3.9 WAR that year after being traded to the Montreal Expos over the 1984-85 off-season. Law would go on to make an All-Star appearance for the 1988 Chicago Cubs.

So you could say that Topps did a good job with these picks, even if you wouldn’t classify two of the players as stars. All three of them were All-Stars during their career. They put in a total of 40 seasons in the majors and continued to play well long after the card was released.