Card of the Day: 1887 Old Judge Art Whitney with Dog

Today’s Card of the Day goes back to the early days of the Pittsburgh Pirates, back when they were known as the Alleghenys. The Old Judge set is an amazing piece of baseball history. Over 500 players in the set and those players have over 2,500 poses in the set. Putting together a set of every player is nearly impossible because some have just one known copy. Add in that there are variations of some poses and you could collect this set for a lifetime and not run out of cards to buy.

When our history site launches, we are going to post a new Card of the Day article almost daily. The plan is to do them often during the season and every single day during the off-season, so you always have something to read. We will have a minimum of three articles each day on the history site.

The Old Judge set will be featured often as the Card of the Day because it includes a large selection of Pittsburgh players and poses, including four Hall of Famers pictured with the Alleghenys. Despite the star power, the first OJ (also known as N172) card we look at is third baseman Art Whitney, who is pictured in this very unique pose. 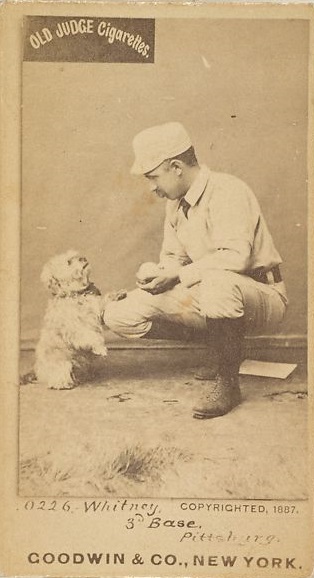 There is a story behind the card, and I don’t know if it’s true or where it came from, but some people say that the card was meant to be humorous. Whitney was known for moving around to teams, showing he had no loyalty, while dogs are considered loyal.

There are some problems with that idea, specifically that whoever said that he moved around a lot, included four team moves that happened after the picture was taken in May of 1887. Two of those teams released him and one folded, so he didn’t have much say. He played for three teams during the 1880-82 seasons, but he was also a sub .200 hitter at the time, so he didn’t exactly have the pull to demand to be traded or leverage to sit out for a better deal.

When they took the photo he was in his fourth season with Pittsburgh, which makes it quite odd to think a photographer would suggest that he liked to move around a lot when he had been in the same place that long.

I don’t believe the story because it has a lot of holes, but I posted it here in case you see it elsewhere.

Whitney was a .248 hitter in 368 games for the Alleghenys, playing three years with them while they were in the American Association, followed by starting at third base during their first season in the National League. He failed to hit a single home run during that time. In fact, he homered five times total in 11 seasons and three of those homers came in May of 1891.

In the dog photo, he’s wearing the uniform of that first NL Pittsburgh team, which you can see better in this other pose of him from the OJ set: 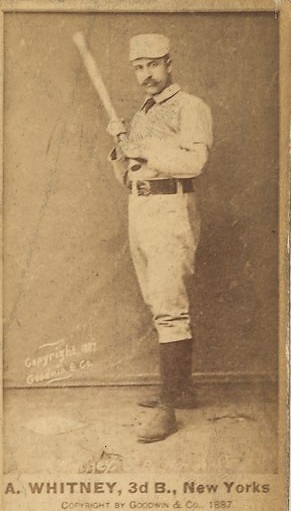 I picked this specific card to show one of the variations in the set. This is a May, 1887 photo, taken the same day as the dog card. Whitney was traded to the New York Giants in 1888 and the Old Judge folks (Goodwin & Co.) reissued the card with nothing more than the team name changed. So that’s the Pittsburgh uniform there in all of its glory.