Yesterday we posted a Prospect Throwback featuring the 1987 Watertown Pirates, a club that had a 20-year-old outfielder named Moises Alou, who went on to do big things in the majors years later. That article was actually part three of our Prospect Throwback series.

Back in early February, I did a two-part article looking at the prospects in some old minor league sets. Both sets were Pittsburgh Pirates affiliates from the 1980’s. I purchased them off of Ebay for about $12 total delivered and then shared some pictures of the cards in the set, along with some information on players of note. The first team was the 1986 Prince William Pirates. Part two of the article was the 1987 Macon Pirates. You can find them all in the Prospect Throwback section of Pittsburgh Baseball History.

The original two articles were very popular with page views, so I found six more sets that were cheap, all of them featuring Pittsburgh Pirates affiliates from the 1980s. I’ll eventually get to all of the sets, but don’t want to overkill them, so I’m posting two at a time. After Watertown yesterday, today we look at the 1986 Nashua Pirates, the Double-A affiliate at the time.

The team went 62-78, finishing in last place in the eight-team league. Nashua was affiliated with the Pirates for three years (1984-86) and they haven’t had an affiliated team since.

Before we get into the featured cards, here are the players who didn’t make the cut. They played pro ball and all made it to Double-A (some to Triple-A), so they at least deserve a tip of the cap. The list is in alphabetical order:

This team included 11 Major League players. Nine of those players are in the set. The other two played a total of nine games with the team and both of them, Bob Kipper and Ray Krawczyk, already had big league experience, so these feel like rehab appearances with the team.

Tommy Gregg was 22 years old, and believe it or not, he was in his first full season of pro ball in 1986, jumping to Double-A just ten months after being drafted out of Wake Forest. Gregg didn’t tear up Nashua in 1986, hitting .268 with one homer in 126 games. He made the majors the following season, then by 1988 he was traded to the Atlanta Braves for Ken Oberkfell. Gregg played 446 big league games, 24 with the Pirates. 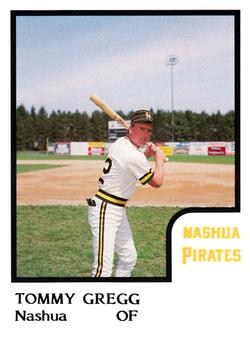 Rich Sauveur made his big league debut less than three months after this set was produced. He dominated in five Double-A starts in 1986 and was with the Pirates by July 1st. He played parts of six seasons in the majors, yet he totaled just 34 appearances and 46 innings. He played pro ball until 2000. 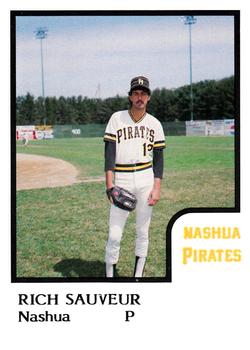 Ruben Rodriguez was a glove-first catcher who didn’t draw walks and didn’t hit for power (or average). He made the Pirates by September 1986 and rejoined the club briefly during the 1988 season. He played until 1995 without making the majors again. His big league career consisted of four games, which is exactly four more than I played in the majors.

Hipolito Pena is the third player here who debuted with the Pirates later in the 1986 season. He was a September call-up, who went 0-3, 8.64 in 8.1 innings. He had better results in his other two partial big league seasons, one with the Pirates and another with the Yankees in 1988 after he was traded for first baseman Orestes Destrade.

Jim Niedlinger had a strange big league career. He made 12 starts for the 1990 Los Angeles Dodgers and had a 3.28 ERA and 1.11 WHIP. That was his only big league experience, despite spending the next four seasons in Triple-A, and it appears that he was healthy the whole time. You figure if you do that well in a decent sample size, you would get another big league shot. 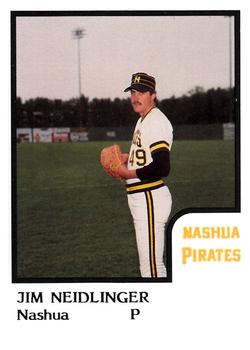 Shawn Holman was a Pennsylvania native, who attended Sewickley HS and Ambridge HS, where he was drafted out of in 1982. His big league time was brief, making five appearances for the 1989 Detroit Tigers. He had a 1.80 ERA, but that came with a 1.90 WHIP due to more walks than innings pitched. The Pirates traded him and Pete Rice (mentioned above) for outfielder Terry Harper late in the 1987 season.

Matias Carrillo didn’t have a big career in the majors, but he might be the most interesting player here. He debuted in the majors in 1991 with the Brewers and was used only as a defensive replacement in left field, one inning each game. He then got time with the 1993-94 Florida Marlins in the franchise’s first two seasons. That gives him more time than most of the guys here, but Carrillo went to his native Mexico and played his last pro game in 2009. His pro career lasted 28 seasons. He actually debuted in affiliated ball with Nashua in 1986, but had extensive time in Mexico already. 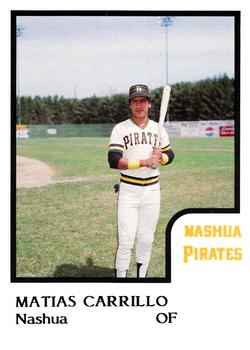 Dorn Taylor saw the majority of his big league time with the 1987 Pirates, posting a 5.74 ERA in 53.1 innings. He also played for the 1989 Pirates and 1990 Baltimore Orioles, which was his last stop in pro ball. I like this card because he’s a pitcher pictured with a bat.

Dennis Rogers was previously featured in the 1987 Macon set linked above. He had a brief minor league career that ended early due to an eye injury. He managed seven years in pro ball, two for the Pirates, but is better known as the head coach at Riverside City College, a position he held for 25 seasons before retiring in 2015.

Spin Williams is a name familiar to most here I’m sure. He spent 27 seasons with the Pirates, starting as a player, then coaching, managing and coaching again, the last 12 years in the majors. He has been with the Washington Nationals since being let go by the Pirates in 2005.

“H” Williams is a unique card in the set, besides the fact that he was a trainer. For some reason the border around the picture on his card is red. No one else has that, all of the others have black borders. I thought there would be an interesting story behind the “H” before his last name. I reached out to Jeff Banister, figuring he was a minor leaguer in the system at this time, so he would know him. Banister said that “H” was a nickname, short for Harold. Not exactly that interesting…but at least we know. The photo quality on this card is much worse than the others, likely because it was taken in a different location with poor lighting. 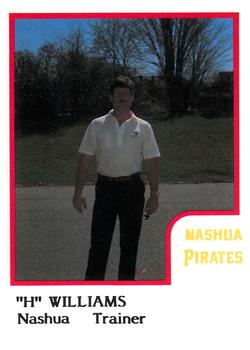 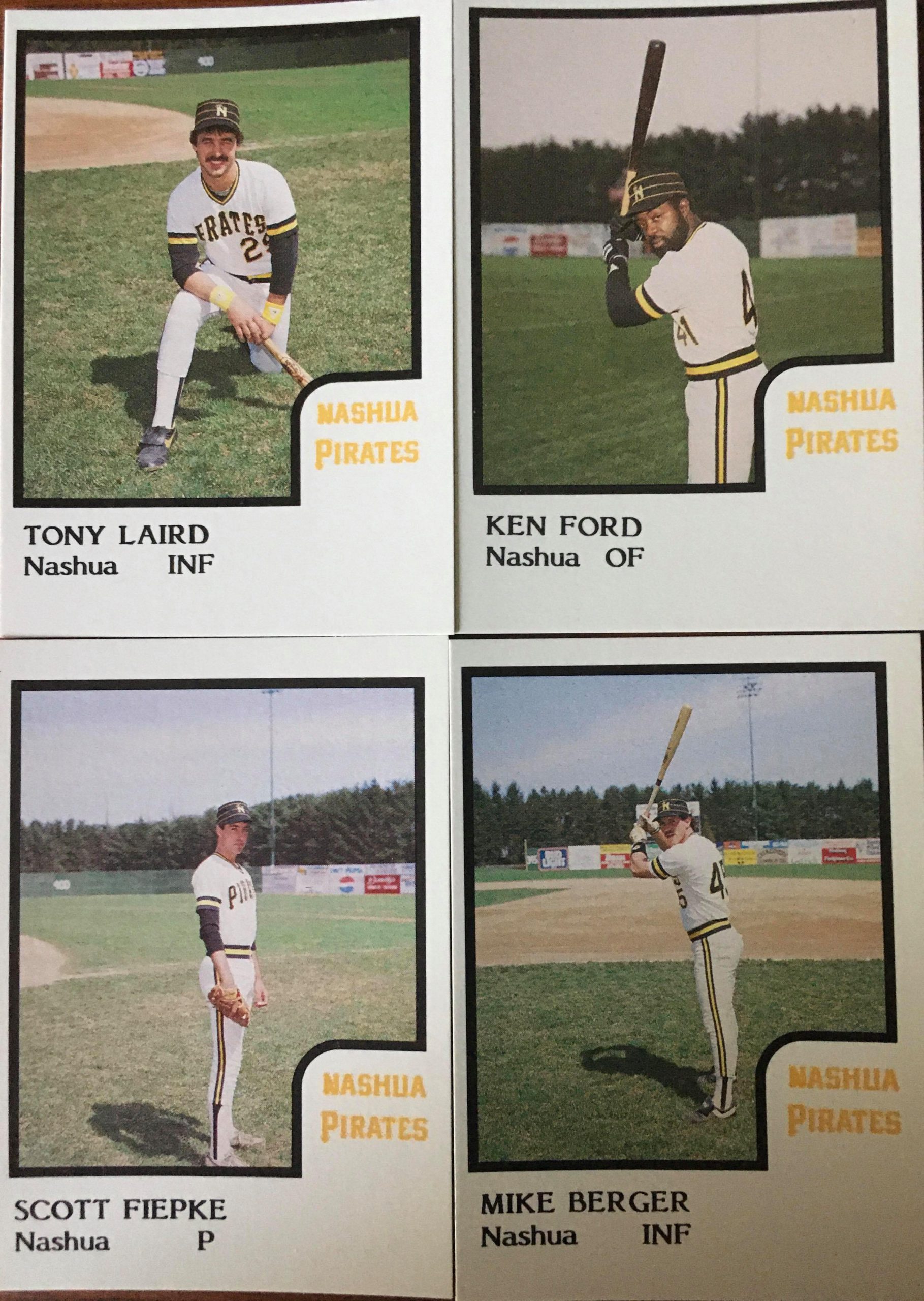 Tony Laird is one of four players I threw in here without MLB experience. He made it here because he played a grand total of two games with Nashua in 1986, so he was really just in the right place at the right time to get a card. Laird played three seasons of pro ball. The San Francisco Giants drafted him twice, but he didn’t sign either time and ended up being a non-drafted free agent signing by the Pirates.

Ken Ford was in the last season of his eight-year career in 1986. I included him because he was drafted during the 1979 World Series winning season and also because he had a huge season in 1982 that didn’t take him anywhere. He hit .300 with 24 homers and 96 RBIs for Alexandria (High-A) that year. Ford topped out at Triple-A.

Scott Fiepke got here for the same reason as Ford. He was a 1979 draft pick, though he came out of high school, not college. Fiepke was a second round pick, who was also in his last season in 1986. He missed quite a bit of time due to injury, pitching just 85 games over that eight-year span.

Mike Berger gets the last spot for leading the team in offense and for his birthplace. The season wasn’t exactly impressive, as he hit .265/.351/.416 in 130 games. No other regular had an OPS over .700 that season. Berger was born in Pittsburgh and attended Central Catholic HS in Pittsburgh. He was a fourth round pick of the Pirates in 1980. He played parts of six seasons in Triple-A, but never made it to the majors. Berger was later a coach, manager, scout and even an assistant GM. He’s now a pro scouting crosschecker for the Brewers. 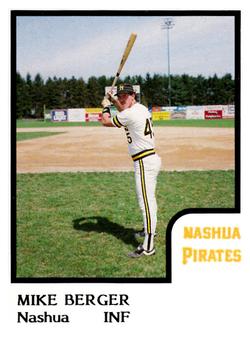