Back in early February, I did a two-part article looking at the prospects in some old minor league sets. Both sets were Pittsburgh Pirates affiliates from the 1980’s. I purchased them off of Ebay for about $12 total delivered and then shared some pictures of the cards in the set, along with some information on players of note. The first team was the 1986 Prince William Pirates. They were led by a small group of players who went on to play in the majors, including 20-game winner John Smiley. Part two of the article was the 1987 Macon Pirates. A set that featured Jeff Banister and some guy named Stan Belinda. They’re worth checking out if you missed those article back then.

Those articles were very popular at the time, so I went online and looked for more cheap sets from the 80’s that I could share at a later date in the same format. As you may have heard, Major League Baseball is on a hiatus, so now is a good time to run another two-part Prospect Throwback series, with one today and one tomorrow. I’ll save the other four sets I bought for later dates, thought that might just be next week or some time shortly thereafter.

Today’s article is on the 1987 Watertown Pirates, a team that played in the New York-Penn League and finished in first place in their division with a 44-32 record. They got swept in the best-of-three championship series by the Geneva Cubs. The Pirates had six future Major League players during the season, though only four made it into their team set.

Willie Smith played just five games for the team and wasn’t with the Pirates long, going to the New York Yankees in the Don Slaught trade. He made the majors briefly with the 1994 St Louis Cardinals. Orlando Merced was also with Watertown for a short time, playing just four games. He had a longer career in the majors, lasting from 1990 until 1996 with the Pirates, before being traded to the Toronto Blue Jays. Neither of those players were around on picture day when ProCards put together the Watertown team set.

Before getting into the large group of cards I picked out to feature here, I thought I’d share the checklist of players who didn’t make the cut. They still deserve a hat tip for their pro career, so here they are in alphabetical order: 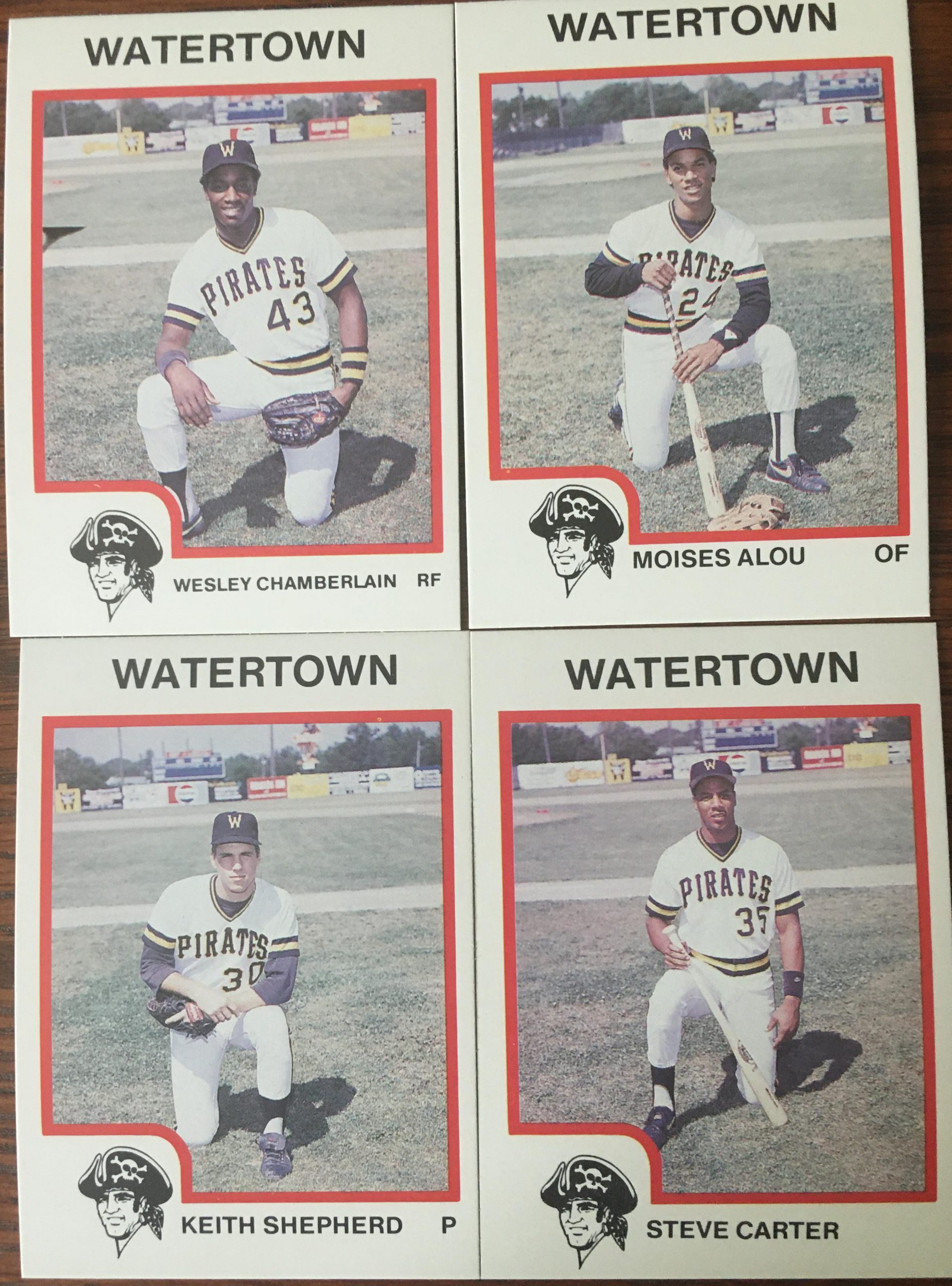 We start at the top with the best player in the set. Moises Alou was 20 years old in 1987, playing his second straight season at Watertown. He was the first round pick of the Pirates in 1986, back when they still had a January phase to the draft. He did not look like a top prospect in 1987, batting .214 in 39 games, though he showed decent power and on base skills, leading to a .725 OPS. Alou made it to the Pirates in 1990 and was traded to the Montreal Expos for Zane Smith later that year. Smith helped the Pirates to three straight pennant, while Alou went on to have a great big league career, finishing with a .303 average and 332 homers in 17 seasons.

Next up is Wesley “Wes” Chamberlain, another player traded away late in 1990, who did better than his return. At least with Chamberlain, he didn’t become a star, but the Pirates dealt him away with two other players for Carmelo Martinez, who played a total of 23 games with the Pirates. Chamberlain had a six-year career in the majors. The Pirates drafted him in the fourth round of the 1987 draft and he made his pro debut with Watertown.

Steve Carter’s big league career lasted just 14 games, spread between the 1989 and 1990 Pirates. He was drafted five times before he finally signed. The Pirates picked him in the 17th round in 1987, four years after they took him in the 21st round out of high school. He had a strong season in Watertown in 1987, batting .310 in 66 games, with 18 doubles and 24 steals.

Keith Shepherd is the last of the four players in the set to make the majors. He was drafted in the 11th round out of high school in 1986 and pitched poorly during his first two years. The Pirates lost him in the minor league draft after the 1988 season. It didn’t come back to hurt them much, as he had a 6.71 ERA over 63 innings and 41 appearances in the majors. He played for four big league teams, one year for each team. 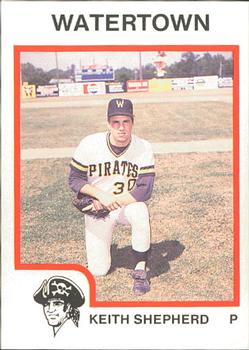 The Pirates were led by manager Jeff Cox, who played in the majors with the 1980-81 Oakland A’s. He managed 13 seasons in the minors, two of those years with the Pirates. His second was with Augusta (Low-A) in 1988. He was a third base coach in the majors for three teams, including the 2006-07 Pirates.

His coach was Charlie Greene (spelled “Green” on the card). He had a very long career in coaching, mostly in college, though he had numerous minor league coaching jobs. Greene’s son, also named Charlie, played five seasons in the majors, while the elder Charlie recently had a big celebration for his 90th birthday.

The trainer cards in the minor league sets are odd, especially since you rarely saw big league trainers get cards. That being said, Mike Sandoval was the Watertown trainer in 1987 and today he is the Assistant Athletic Trainer for the Tampa Bay Rays, so he’s still doing the same thing 33 years later. He spent 25 years with the Pirates, debuting with Watertown in 1987. 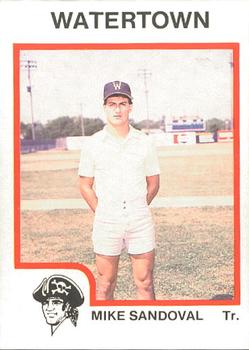 One of the best players on Watertown in 1987 is a key member of the Pirates now. Their current International Scouting Director was one of their best hitters on Watertown. Junior Vizcaino was a 22-year-old first baseman, who batted .306/.388/.472 in 51 games in 1987. He topped out in Double-A in 1990, before moving on to his successful role now.

Jose Acosta was a lefty pitcher for seven seasons in the minors, topping out at Double-A. He was the best pitcher for Watertown in 1987, posting a 1.32 ERA in 47.2 innings, with 48 strikeouts. I would have included him even if he didn’t pitch so well. His middle name is Clemente. 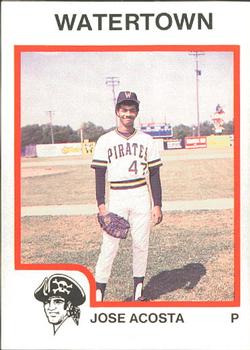 Joe Pacholec was a 19-year-old starting pitcher, who debuted with Watertown in 1987 and pitched three years in the system. He average nearly a strikeout per inning and posted a 3.19 career ERA. Those were intriguing stats when I saw them a few years ago while looking at a different minor league set I owned. I looked up his name and couldn’t find info on why he stopped playing, but I found something better, his contact information. I interviewed him back in 2015 and he gave a great story about his career and how it went south.

I’m sure everyone has a story if you do some digging and Joe Macavage is one that makes you wonder. He pitched for two seasons and did well, posting a 2.89 ERA in 118.1 innings. I did a quick search and came up empty, but I really only included him here because of the card itself. The writing on the front of his card is different than all of the others, as you can see in the picture below. It’s bigger, not as bold and a different font, as if they added it at a later date due to a mistake in printing.

Ed Hartman was the best hitter on Watertown in 1987. He led the club with a .902 OPS and had more walks than strikeouts. Despite reaching Double-A just two years later, his career was over after the 1989 season. 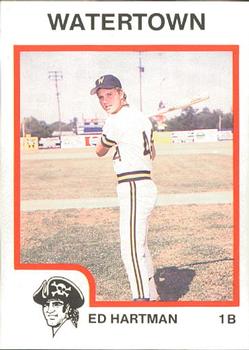 Mark Koller was a 20-year-old pitcher in his third season in 1987. He spent two years in the GCL. He made it here because he attended Peabody HS in Pittsburgh. The Pirates drafted him in the 22nd round in 1985. Koller topped out at Watertown in 1988. No one from his school has made the majors. Five players have been drafted from the school, including a Dave Koller in 1983, who I’m assuming is related.

Ed Shea is the final player here, narrowly making the cut. He played just 41 games as a pro, all for Watertown in 1987. He was drafted four times, which makes him noteworthy because he turned down signing after being picked in the second round in 1985. He then dropped to the sixth round, then the 29th round, where the Pirates took him in 1987.