Yesterday we posted part one of our Prospect Throwback mini-series. I bought two minor league sets last week from the mid-80’s and decided to write a pair of articles on the sets, looking at the one-time prospects and hopefuls for the Pittsburgh Pirates. Yesterday was a look at the High-A team from 1986 in Prince William. We drop down today to Low-A for the 1987 Macon Pirates.

Here’s the checklist, which is listed in set order:

Some names will stand out right away, while others will be familiar to those who followed the Pirates back then. Jeff Banister is the obvious first name that catches your eye, while some of you probably let out a sigh (I’m sorry) seeing Stan Belinda listed there. This is 1987 Stan Belinda though, a 20-year-old who was drafted the previous year in the tenth round, and was still two full seasons away from making the majors. Scott Ruskin, Julio Peguero, Mike York, Rick Reed and Tony Longmire also made the majors.

Macon had a 73-64 record, good for fourth best in the South Atlantic League, but not enough to make the playoffs. They were managed by Dennis Rogers, who had a brief minor league career that ended early due to an eye injury. He managed seven years in pro ball, two for the Pirates, but is better known as the head coach at Riverside City College, a position he held for 25 seasons before retiring in 2015. 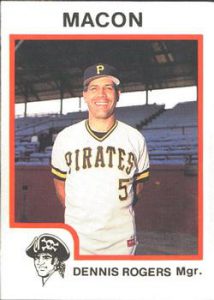 The leading hitter for the club was a 24-year-old third baseman named John Love. He was in his third of four years in pro ball. Love hit .313 with 29 doubles, 14 homers and 91 RBIs. He hit just nine homers total in his other three seasons.

The best pitcher could go to one of two players, depending on how you feel about relievers and what is enough work for them to be considered the best. Stan Belinda had a 2.09 ERA and a 1.05 WHIP in 82 innings. Mike York doubled his inning total with 165.2, while posting a 3.04 ERA and 169 strikeouts. No one else on the team cracked the century mark in whiffs. York also had 88 walks, which led to a 1.31 WHIP. His 17-6 record is quite impressive compared to today’s minor league pitchers, who don’t go deep into games and rarely rack up 23 decisions and never reach 17 wins. York’s MLB career consisted of 12.2 innings with the 1990 Pirates and 34.2 innings for the 1991 Cleveland Indians. 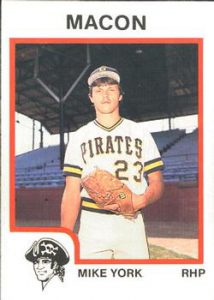 Belinda had a 12-year career in the majors, posting a 4.15 ERA over 685.2 innings and 585 appearances. He threw five no-hit innings during the 1991 playoffs, and then I don’t remember what happened after that and neither do you (I’m talking directly to you, comment section).

Sticking with the MLB players, Scott Ruskin had an interesting minor league career. His big league days consisted of 192 relief appearances over four seasons, including 44 games for the 1990 Pirates before he was traded mid-season for Zane Smith. So how well did he pitch three years earlier in Low-A you might ask? He pitched a .297 average, with nine homers and 42 RBIs in 81 games. He was a 1B/OF in 1987, two years away from his first time on the mound.

Rick Reed was a reliever in 1987 and pitched well, posting a 2.50 ERA in 93.2 innings. He had a split career in the majors, playing four seasons for the Pirates, though his time resulted in only 124.2 innings total, with some of that time as a starter. From 1988 until 1996, he pitched 61 games in the majors. At age 32 in 1997, things finally clicked for him and he had six straight seasons of double digit wins in the majors, three times throwing over 200 innings in a season. He was named to two All-Star teams. His first name is “Richard” on the card, which is not a way I’ve heard his first name before. 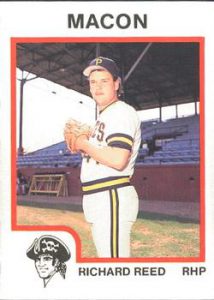 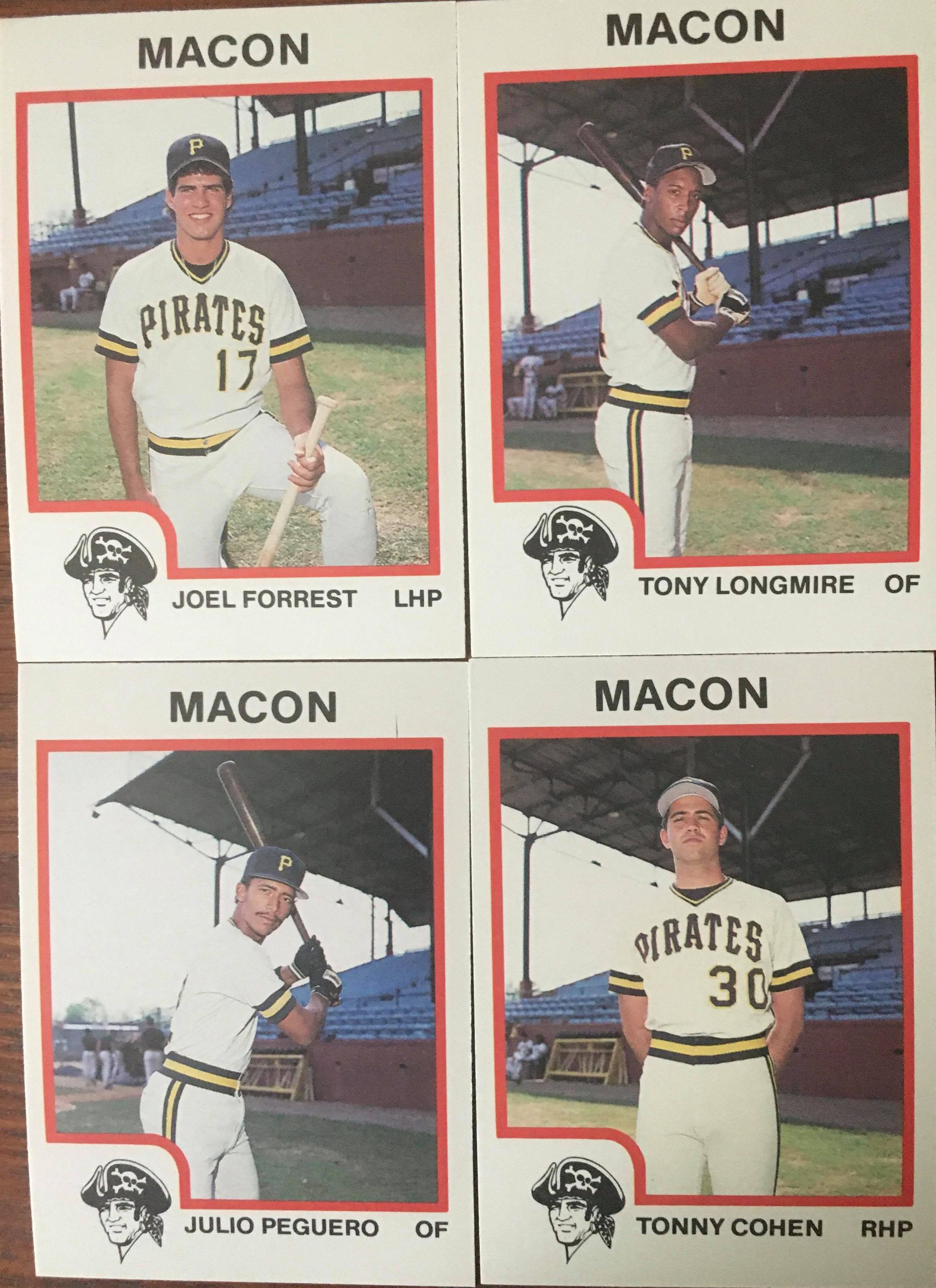 I have to mention pitcher Joel Forrest. I knew one of his relatives, which is why I bought the 1988 Augusta Pirates set about ten years ago. Forrest was a fourth round pick in 1986 and his career was over by 1988. If I remember correctly, he had some arm issues due to overwork.

Pitcher Tonny Cohen was from Holland and pitched two years in the minors, doing fairly well. In 256.1 innings, he had a 3.93 ERA and 221 strikeouts. He was still young at the time, but it appears that he preferred to pitch in his home country.

On the hitting side, Tony Longmire was just 18 years old at the time. He was an eighth round draft pick of the Pirates in 1986. Longmire handled the older competition well, batting .263 in 127 games, with 24 extra-base hits, 18 stolen bases and 41 walks. He wasn’t fast-tracked to the majors though. He debuted in 1993 with the Phillies and batted .285 over 139 games. His career had an odd ending, with him batting .356 in 59 games in 1995, then never playing in the majors again. He was actually injured for all of 1996, then didn’t play in 1997, before attempting a comeback that fell short.

Julio Peguero was also 18 years old and just like Longmire, his only big league time would come with the Phillies, playing 14 games in 1992. He also did well against the older competition, hitting .285/.353/.352 in 132 games with Macon. He stole 23 bases and walked 56 times. Peguero was the player to be named later in the Carmelo Martinez trade in August of 1990. 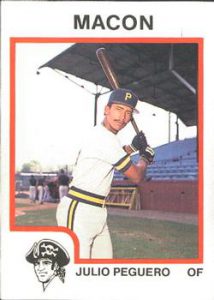 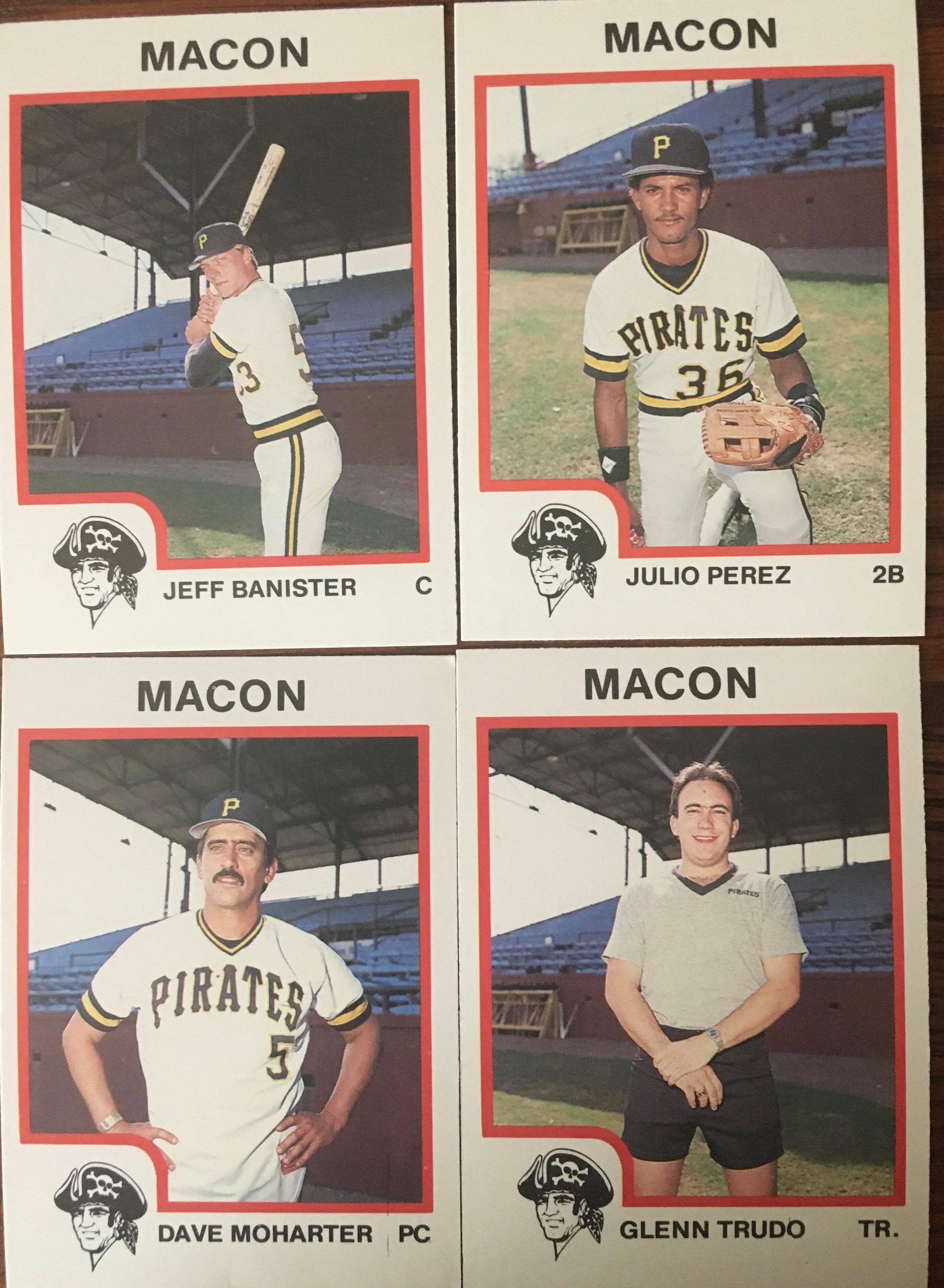 Julio Perez appeared to be a semi prospect back then. At 21 years old, the middle infielder hit .308 and stole 29 bases, while striking out just 31 times in 433 plate appearances. He stole 36 bases the next season and reached Double-A that year, but never made it to Triple-A.

The set included pitching coach Dave Moharter, who played ten seasons in the minors without making the majors. He played six straight years for the Texas Rangers in Triple-A, then went into coaching after his playing career ended. He is also in the 1988 Augusta set after the Pirates moved their SAL club to a different town in Georgia. Sadly, Moharter passed away in 2011 after a battle with cancer.

Finally, the Macon set even included trainer Glenn Trudo, who was able to finesse his way into three baseball card sets in the 1980s. He’s in the 1988 Augusta set, as well as the 1986 Watertown set, where he got this interesting replacement for career stats… 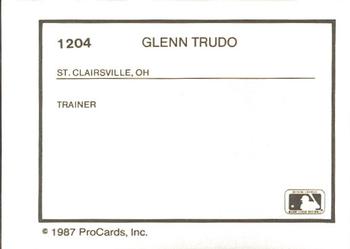