I recently purchased two minor league team sets from ProCards, which were released in the mid-80’s and featured players for the 1986 Prince William Pirates and the 1987 Macon Pirates. I’ve collected baseball cards since I was six, and the older minor league sets have always been intriguing to me. Their simple design, along with seeing MLB players before they made it, plus looking into the careers of players who never made the majors.

I bought these two particular sets because I shared a photo from the Prince William set on our Facebook history page. I was looking for an early image of Tom Prince and the photo caught my eye. Most have generic poses, but his was a bit different from the rest. The Macon set was being sold by the same person and I decided to get both. The two sets were $12 combined, so the price was obviously appealing as well.

After looking through the sets, I decided to share them with the readers here. I figured that a slow weekend in early February would be a good time for a pair of fun articles, though the Pirates were a little more busy than I expected yesterday. The Sunday of the Puppy Bowl is always the slowest weekend on our site, as people gather with their friends and throw Puppy Bowl parties. I know, I know, some of you enjoy the Kitten Bowl as well. That’s your prerogative.

We will look at the Macon set tomorrow. Today we start with the 1986 Prince William club. First, here is the checklist in alphabetical order:

As you look at that group, the two names that probably stand out are Tom Prince and John Smiley. If you followed the Pirates in the early 90’s, you probably recognize some other names. If you really follow baseball history, you know that their manager had a decent career in pro ball. 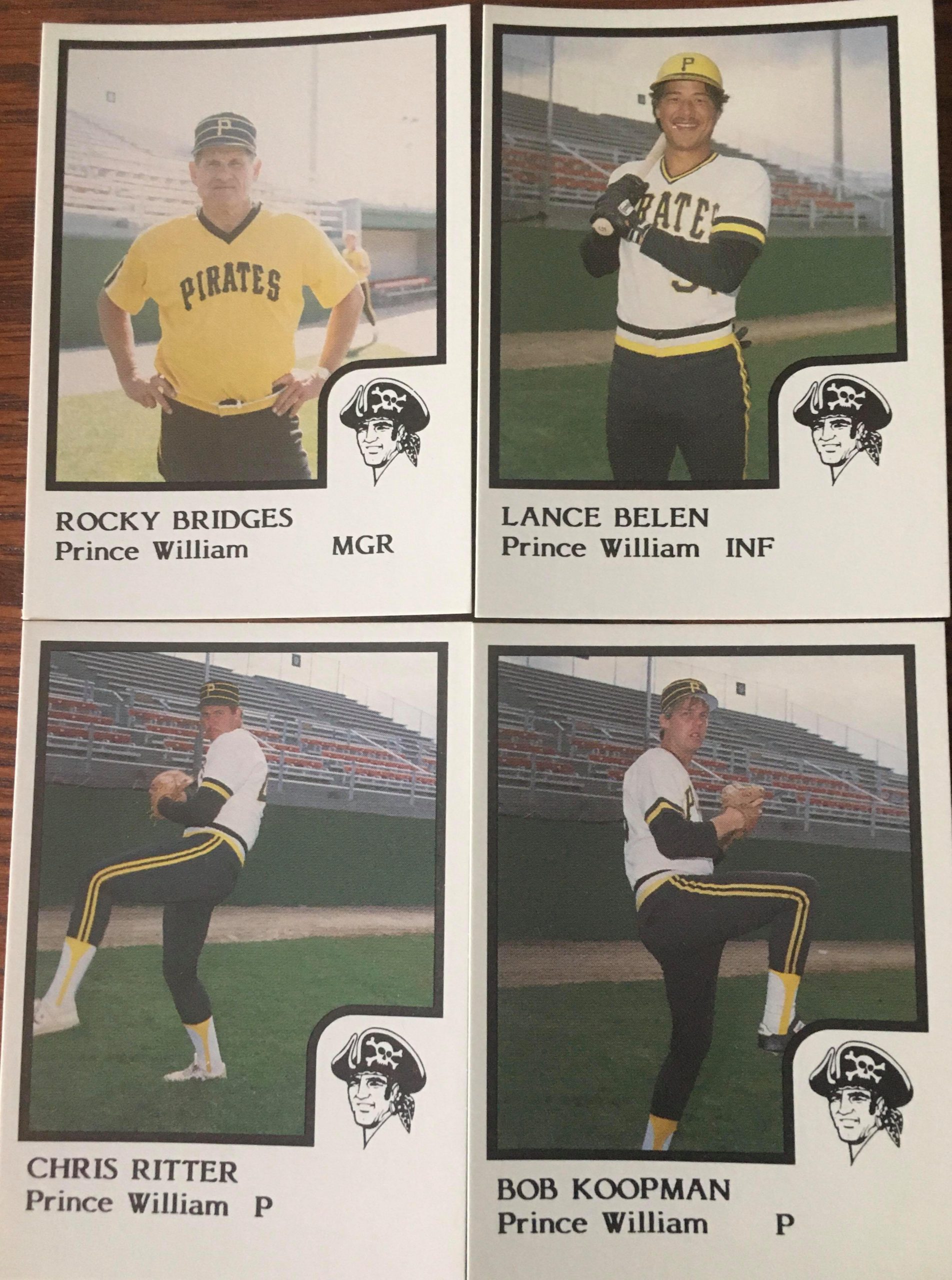 Rocky Bridges was an infielder for 11 seasons in the majors from 1951 until 1961. He wasn’t much of a hitter, but he played solid defense during his 919 big league games. In 1958, he was an All-Star with the Washington Senators. After his career, he managed for 21 seasons in the minors. Prince William was his 18th season of managing and first of four years with the Pirates. He was involved in baseball from 1947 until 1989. So here’s how ProCards summed up his career on the back of his 1986 card.

Prince William finished with a 67-72 record in 1986. Their best hitter during the season was Lance Belen, a 23-year-old first baseman, who batted .293 with 18 homers, 88 RBIs and 32 doubles. He had a nice season at Double-A in 1987, but repeated the level in 1988 and then never played pro ball again. He hit double digit homers in all five seasons in the minors.

The team leader in wins with 14 was 6’7″ right-hander Chris Ritter. He had a 3.05 ERA in 177 innings and also led the club with 149 strikeouts. Ritter was just 21 years old at the time, so between the size, youth and success, you probably would have kept an eye on him if you bought this set back then. However, he topped out at Double-A. 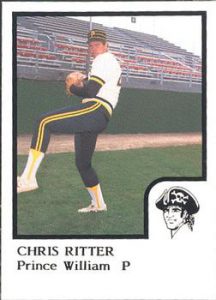 The set featured a spelling error on the card of Bob Koopmann, who was a lefty pitcher for three seasons in the minors and has been a manager in college and the minors for 25+ seasons. They left off the second N in his last name. Koopmann had a 5-15 record in 1986, despite a 3.15 ERA. 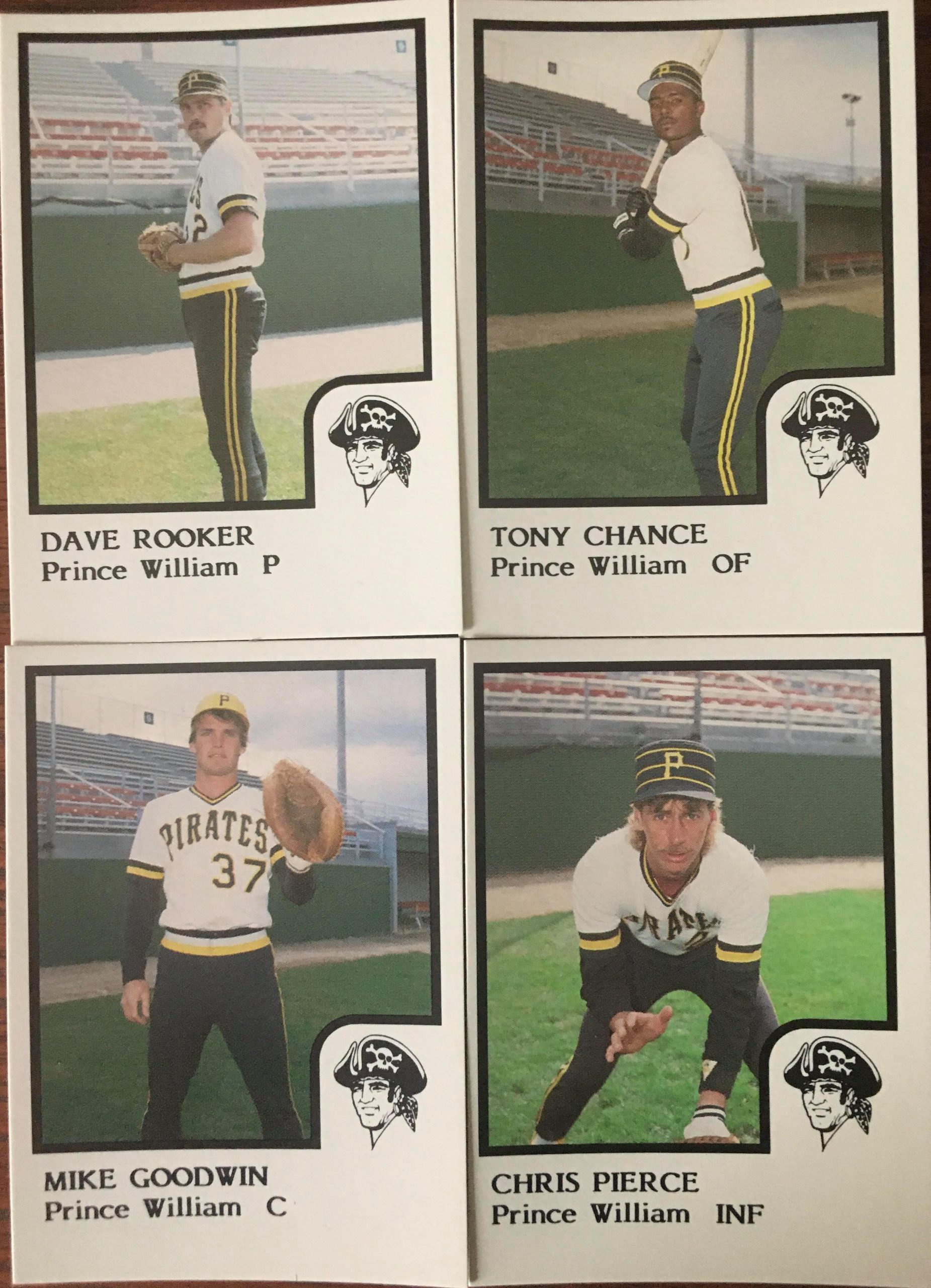 There’s a son of a Pirates legend in the set. Dave Rooker is the son of Jim Rooker, who won 82 games over eight seasons with the Pirates, but is better known for starting game five of the 1979 World Series with the Pirates trailing 3-1 in the series. He’s also known for “walking home from Philadelphia”, but the postseason heroics stand out the most. The younger Rooker pitched four years in the minors, topping out at Double-A.

Tony Chance was a 21-year-old prospect at the time of the set, playing in his fourth season of pro ball. He would make it to Triple-A in 1990, played pro ball until 2002, but he never made it to the majors during a 20-year playing career. His father Bob Chance played six seasons in the majors.

On the flip side from Chance was catcher Mike Goodwin. His entire pro career consisted of four games and an 0-for-6 at the plate. He was just in the right place at the right time to get a card in this set. 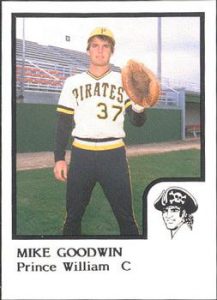 One of my favorite stories from the team is shortstop Chris Pierce. He played just two seasons of pro ball. He was a .166 hitter over 74 games after being drafted in the 24th round. Here’s the interesting part I stumbled upon when looking at his brief career. In 213 plate appearances, he had zero extra-base hits. He couldn’t even leg out a double in the gap? He never got a chance to feel the tingling in his arm as he connected with the ball. To run the bases – stretch a double into a triple, and flop face-first into third, wrapping his arms around the bag….okay, that last part was taken from Field of Dreams, but you get the point.

The 1986 team had eight future MLB players, but Jeff King, Felix Fermin and Tommy Shields were not there during picture day for the card set. John Smiley and Tom Prince are the big names from the set outside of Rocky Bridges of course. They were joined in the majors by Brett Gideon, Tim Drummond and Jose Melendez.

Gideon played for the 1987 Pirates, getting into 29 games as a reliever. He’s probably best remembered as the player the Pirates gave up to acquire Neal Heaton at the end of Spring Training in 1989. He played two years with the Montreal Expos in addition to his time with the Pirates. 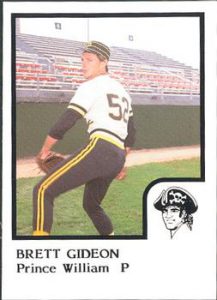 Drummond pitched six innings over six relief appearances with the 1987 Pirates. He got to wear two different uniform numbers during his brief time (55 and 56). He is also better known for a trade involving him, though not necessarily the one with the Pirates. He was part of the Mackey Sasser-Randy Milligan deal with the New York Mets, but was later part of the package the Mets used to acquire Frank Viola from the Minnesota Twins. Drummond pitched a total of 49 big league games, 43 with the Twins. 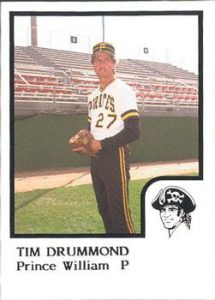 Melendez never played for the Pirates, but he was one of the rare minor league Rule 5 draft success stories. The Pirates lost him in the 1988 draft and then he went on to play five seasons in the majors, posting a 3.47 ERA in 109 games. 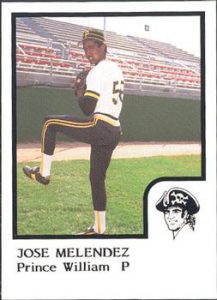 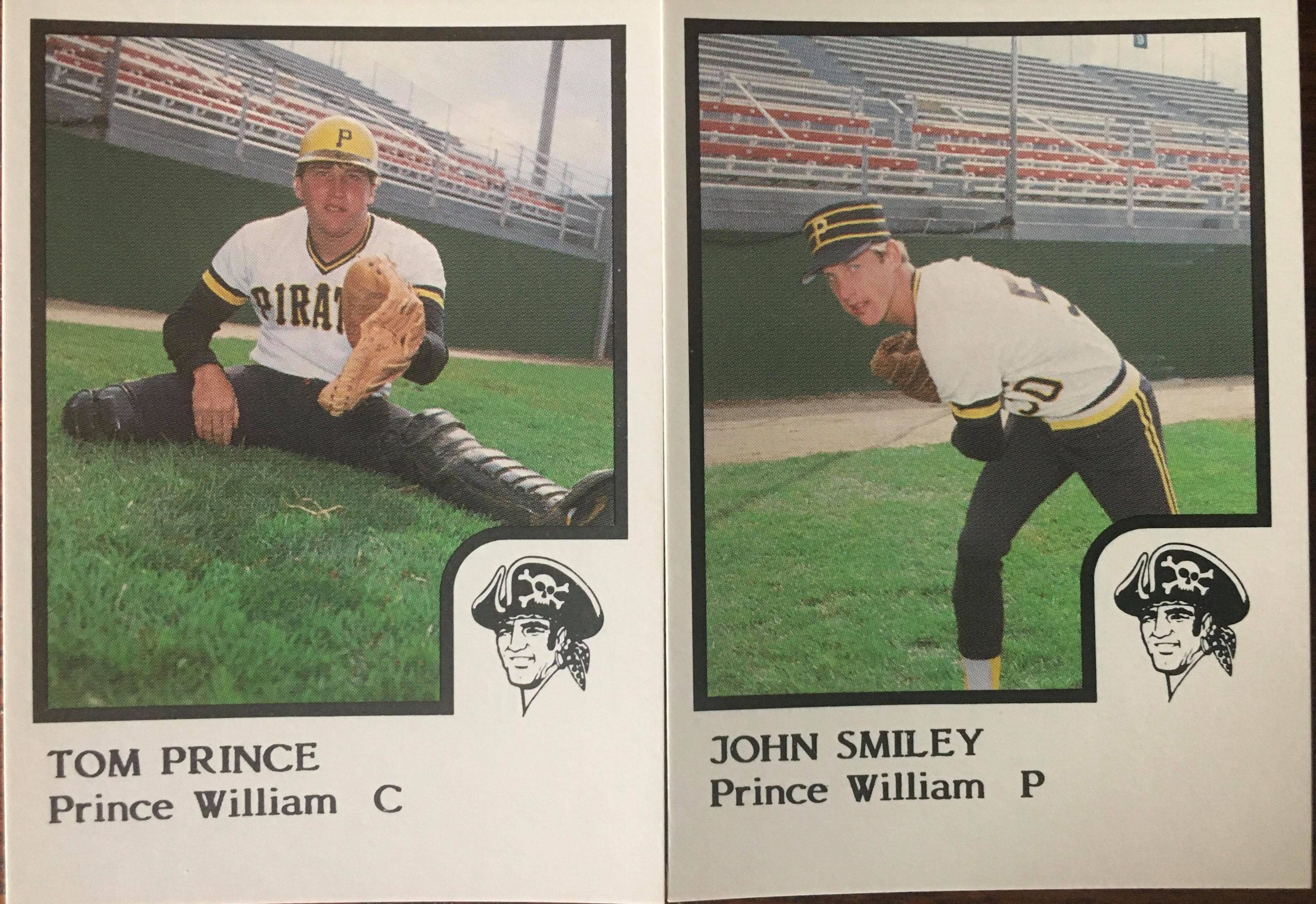 Smiley would make the majors in 1986, despite the fact that he started the season in High-A ball and was 21 years old at the time. He debuted with the Pirates in September and would go on to win 60 games with the club, including a 20-8 record during the 1991 season, when he finished third in the Cy Young voting. He won a total of 126 big league games over a 12-year career.

This article all started with Tom Prince, so that’s where it will end. He was a 21-year-old catcher at the time, drafted in the fourth round in 1984, back when they still had the January portion of the draft. He batted .253 with ten homers, 34 doubles and 50 walks in 1986. By the next season, he would debut in the majors. Prince was with the Pirates through their three-year run of playoff appearances in the 1990’s and he played his final big league game in 2003. He then held various coaching positions with the Pirates until managing the club on the last day of the 2019 season. Here’s the card that caught my eye, catching pun slightly intended.